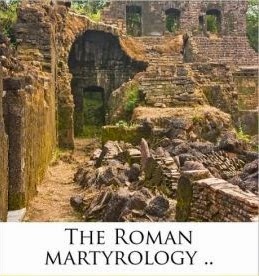 On October 4 our early Irish calendars present us with something of a mystery surrounding a female saint with the name of Baluíne. The Martyrology of Oengus begins:

4. Beseech Marcellus the bishop,
with the vastness of his vigour,
at the suffering of the virgin,
the bright-limbed Balbina.

The phrase 'suffering of the virgin' would imply a female martyr, yet as we know, the vast majority of the early Irish saints who suffered martyrdom did so contending for the faith in other countries. It is clear from the scholiast notes on this entry that later commentators were perplexed and sought to find a local identity for the 'bright-limbed Balbina':

Bigsech of Kilbixy is an Irish female saint whose feastday is commemorated on June 28. In Canon O'Hanlon's account of her, which I posted here, he remarked that 'this saint appears to have had another festival, at the 4th of October.' But did she? For Balbina was not an Irish woman at all, despite the attempted Gaelicization of her name, but one of the early Roman martyrs. There seem to be two saints of this name, the first, commemorated on March 31, is said to have been the daughter of a Roman official called Quirinus and is linked to the discovery of Saint Peter's chains. There is a second Balbina, however, whose name is attached to one of the Roman catacombs, and inevitably the identities of both have been the subject of some confusion over the centuries. In Volume 5 of his work The Sacramentary: Historical and Liturgical Notes on the Roman Missal, Ildefonso, Cardinal Schuster, records at October 4 'Saint Balbina, Martyr' and it would seem that this is the second Balbina, who gave her name to the Roman cemetery and who was commemorated on this day, even in Ireland!