Saint Connachtach of Iona, May 10 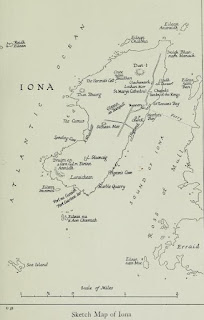 May 10 is the feast of Saint Connachtach, an 8th/9th century abbot of Iona. This successor to Saint Colum Cille enjoyed a particular reputation as a scriba selectissimus, a scribe most choice, but the evidence from the Annals suggests that his tenure as abbot was of short duration and set against a backdrop of Viking attacks. Cowley Father, the Rev. Edward Craig Trenholme, gave a summary of the careers of the abbots of Iona in his 1909 guide to the historic monastery. He begins his listing of those in the ninth century with our saint:

18. Connachtach (801-802), "a scribe most choice and abbot of Ia", had a short and troubled term of office. It must have been in quieter times and a lower station that he attained to fame as a "scriba selectissimus." Some marvellous manuscripts of the Irish monastic scribes survive to show what Connachtach's title implies. But alas! for such peaceful arts and Iona's stores of precious writings in the calamitous ninth century. The Danish attack on the monastery in 795 proved the preliminary of a long period of terror, blood, and fire, in which Iona won the glory of "red martyrdom," but lost well-nigh all else. In Connachtach's first year the monastery was burned by the "Gentiles," and the Abbot died next year. The ravagers returned again and again, as we shall see, but after each successive attack the love and veneration of the monks of Iona for their home forced them to re-establish themselves there at all perils.

Canon O'Hanlon in his account of Abbot Connachtach gives him the alternative name of Cormac and suggests that he may have met his death at the hands of the Viking raiders:

On the authority of the Martyrology of Tallagh, which enters Cormac at the 10th of May, Colgan assigns to this day, the festival of the present holy man. This authority is followed, likewise, by the Bollandists, who remark on the number of Irish Saints so called, as enumerated by Colgan, when treating about several bearing that name. Connachtach—a name substituted for Cormac—is said to have been a select scribe, and he became Abbot of Iona, most probably, after the demise of Bersal Mac Seghine, which is given, at the year 801, having been incumbent for thirty-one years. Connachtach followed his predecessor to the tomb, after a very short term of rule. He died according to some accounts, in 797—but recte 802—assuming the corrected chronology found, in Dr. O'Donovan's Annals of the Four Masters. The cause assigned for Connachtach's death, is not recorded; but as Hy-Columcille was burned by the Gentiles, A.D. 802, it is probable enough, that our Abbot met with a violent death, at their hands, having perished during the calamity inflicted on his religious community.

Some modern writers have suggested that Abbot Connachtach's reputation as an eminent scribe makes him a possible candidate for involvement in the creation of the Book of Kells, traditionally believed to have been produced at Iona. In a lecture of 2011 Arne Kruse argued:

The organisation of what was tremendous artistic activity on Iona sometime in the second half of the eighth century would have been an economic and logistical challenge. The effort must have been conducted by an inspired leader with extraordinary managerial and artistic skills. The one in charge would have been the scribnidh or scribe of the community, an office which carried equal importance to that of the abbot. The scribe behind the tribute in copper, stone and vellum is anonymous. However, if it is correct that the intense artistic activity may have taken place toward the end of the eighth century, there is a chance that the mastermind could have been Connachtach, ‘an eminent scribe and abbot of Ia’, who, according to the Annals of Ulster, died in 802, possibly during the Viking raid that very year. It is rare to hear of scribes in the annals, and the mention of Connachtach could be because he was murdered, although the murder itself is not mentioned. On the other hand, it can also be that Connachtach was such an extraordinarily brilliant scholar, artist and coordinator that his death merited a note.