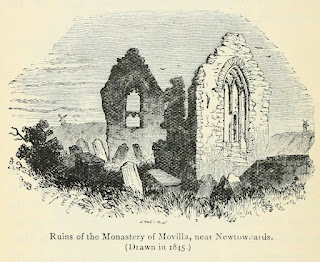 February 3 is the commemoration of an eighth-century successor to Saint Finnian at the Monastery of Moville, County Down, Saint Cuanan or Cuanna. Canon O'Hanlon records that he also seems to have had a connection with County Wexford:

St. Cuanan or Cuanna, surnamed Glinn, or Glinne, Abbot of Moville, County of Down.
[Eighth Century.]

Where this holy man was born, we have no means left for discovering; but, probably, his birth took place, before the close of the seventh century. In reference to his festival, an entry in the Martyrology of Tallagh, at the 3rd of February, is, Cuanna (i Glinn) Ab. Maighi Bile. The latter place is now called Moville, in the parish of Newtownards, barony of Lower Ards, and county of Down. A festival, in commemoration of St. Cuanan Glinne, Abbot of Magh-bile, is registered, likewise, in the Martyrology of Donegal, at this day. On such points, nearly all our Calendarists agree. In the calendar, compiled by the Rev. William Reeves, he is also entered, among those holy men, living in the north-eastern part of Ireland. He ruled over this flourishing establishment, while it was in a high state of efficiency. The situation of his monastery was near the head of Strangford Lough, where St. Finian, surnamed Findbarr had founded it, towards the middle of the sixth century. Many other holy abbots preceded him, in the government of this celebrated establishment. His immediate predecessor appears to have been Colman, son of Murcon, who died in the year 731. It would thus seem, that the present holy man was superior of Moville, for about ten or eleven years.

According to the records of the Irish Ordnance Survey, in the parish of Ballybrennan, or Ballycowanmore, alias Kilcowanmore, county of Wexford, there was a well dedicated to a St. Cuan, who was patron saint of the parish. This well was about one hundred yards south-west of the church; and, old people, in 1840, used to come there, on St. Cooaun's Day, February 3rd, to pray for their friends. The old church of Kilcowan is now utterly ruined. It was about 40 feet in length, and 18 feet 6 inches in breadth. A large and much frequented graveyard surrounds this church...The parish lies within the barony of Forth. Here, too, a patron was held, on the present day. It is likely, therefore, that this holy man must have had some connexion with that place, although he seems to have departed to bliss, in the northern part of Ireland. This saint died, A.D. 742, according to one account [Annals of the Four Masters]; and, again, his death has been deferred to A.D. 746. [Annals of Ulster].

Lovely piece, just to note that the Kilcowanmore mentioned in this article is actually based in the barony of Bantry and not Forth. It is located in the modern parish of Bree, where there also happens to be a second church and holy well dedicated to St. Cuanan (kilcowanbeg), which is situated in the townland of Barmoney.

All the best,
Colm

Thanks very much, I've noticed before that some of the places Canon O'Hanlon talks about are today placed in other counties etc. I don't know if his info was simply mistaken (and given the size of the task he undertook, that's quite understandable) or whether boundaries have changed since his time. I always appreciate comments based on local knowledge and I'm sure it's a lovely part of the country! Thanks again.