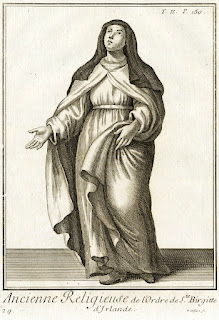 On March 9 the Irish calendars commemorate Saint Brigid of Moin-Miolain and also another Brigid whose locality is not specified. The entry in the Martyrology of Donegal reads:

As Canon O'Hanlon explains, not much is known of either:

A saint, named Brigit, Mona Milain, occurs in the Martyrology of Tallagh, as distinguished from another St. Brigid, whose festival is set down, at the same day, the 9th of March. We are informed, likewise, that the Martyrologies of Donegal and of Marianus O'Gorman make a like distinction, at this same day. They record, that our present saint was venerated, at a place called Moin Miolain. There seems to be little consistency, in Colgan's statements; when, in one place, he notes her, as the daughter of Neman, and at another, as mentioned by Keating, the Brigid, daughter to Aidus, son of Eochad, son to Colle, son to Caelbad, King of Ireland. Colgan says, Moin-Miolain is to be found, in Dalaradia, where the posterity of Caelbadius, a supposed progenitor to this saint, had extensive sway. The Bollandists have notices of Brigidade Moimiolain, at the 9th of March. It has been conjectured, that the present saint may have been that holy virgin, called Brigh, and mother of the handmaids of Christ, mentioned in the Acts of her great namesake, St. Brigid of Kildare. However, her history is involved, in great obscurity.

He adds in a footnote:

Speaking of the many saints, bearing the name of Brigid, in Ireland, we find the following enumeration in Dermod O'Conor's translation of Keating's 'History of Ireland':