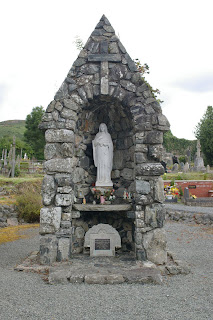 On April 2 we commemorate a County Down holy woman, Saint Bronagh of Kilbroney, who despite having no surviving written Life or other mention in the historical record, retains the devotion of the Irish people to this day. Her home territory is situated in a beautiful valley near the village of Rostrevor, and the local Catholic parish church preserves a bell associated with the saint, even though it was made some centuries later. This bell was hidden at some point, possibly to preserve it from destruction during the iconoclasm associated with the Protestant reformation, and was rediscovered during the nineteenth century. Canon O'Hanlon does not seem to be aware of the recovery of the bell in his account of the saint, taken from Volume IV of his Lives of the Irish Saints, but does mention another relic, the saint's bachall, or staff:

ST. BRONACH, VIRGIN, PATRONESS OF KILBRONY PARISH, COUNTY OF DOWN.

Time was when the holy virgin, St. Bronach, gave a bright example of faith, and of devotion to her sacred calling, among those majestic mountains of Mourne, that rise within the modem parish of Kilbrony. Her period, however, does not seem to be known. She is called the Virgin of Glen-Seichis, which was an ancient name for the modern parish of Kilbrony, in the county of Down, also bearing the names of Glentegys, Clonfeys, Clonseys, and Kyllbronca, in ancient documents. This parish bears the name of Killowen, in addition to its many other denominations, from a district so called, which lies in its southern part. It is called, likewise, the church of Nister. This parish was merely a mensal one, belonging to the Bishop of Dromore, while we find that the Mc Keon family—and perhaps other families—styled themselves "servants of St. Bronach." This church was called by the present name of Kilbrony, from Bronach, its patron saint, whose festival is placed by the O'Clerys, at the 2nd of April. In their Calendar, we find: "Bronach a virgin of Glionn-Seichis."Of this parish, likewise, St. Bronach is the special patroness. She is called, also, Bromana, and her festival belongs to this day. The old church of this parish is situated, about half-a-mile north-east of that beautiful village, known as Rosstrevor, in the county of Down. This church is now a venerable ruin, and in the adjoining chapel-yard an ancient stone cross may be seen. The Kilbrony mensal consisted of certain lands, tithes and dues, which were appendant upon an office, known as that of St. Bromana's baculus, in the church of St. Bromana, according to old documents. We find the place styled a Rectory and a Vicarage. The custody of a certain relic, said to have been possessed by our saint, and attended with some privileges, had been formerly assigned by the bishop of this diocese to a clerical keeper. In the church of Kilbrony, appears to have been preserved the baculus or crozier of St. Bronach; and, the guardianship of this relic was entrusted to an ecclesiastic, who farmed certain lands, tithes and dues, belonging to the bishop's mensal in this parish. In a Taxation of all the Benifices in Dromore diocese, which took place in A.D. 1546, the Vicar of Killbronagh, now Kilbrony, was assessed at two marks. In the Martyrology of Tallagh, the patron's name occurs, at the 2nd of April, as Bronach, Virgin. The Martyrology of Donegal this day registers, Bronach, Virgin, of Cill Sechis, as having a festival. The Rev. Alban Butler has a record of this holy woman, at the 2nd of April, and she is noticed, moreover, in the Circle of the Seasons. Likewise, that Calendar, compiled by the Rev. William Reeves, giving her name, festival and locality, may be mentioned, in this connexion.

Email ThisBlogThis!Share to TwitterShare to FacebookShare to Pinterest
Labels: Female saints, Irish saints, Saints of Down