On April 28 we commemorate a number of interesting Irish saints including one from County Clare- Luchtighern, an early abbot of Ennistymon. Canon O'Hanlon brings us the details from the sources, in this case we do not have a surviving Vita of the saint himself, but find him featured in the hagiography of other saints, including that of Saint Ita:

Little is known regarding this holy man, except what we learn of him incidentally, in the lives of other Irish saints. In the Martyrology of Tallagh, at the 28th of April, he is called the son of Cutrita. However, he is called St. Luchtigernus filius Huatriti, by the Bollandists, at this same date; while they add, he is similarly named by St. Aengus, and by Marianus O'Gorman. Brigh, daughter of Forannan, son to Conall, son to Tochtar, son to Amhalgaidh, sister of Maelaithghin, was his mother, according to the O'Clerys. There was a Saint Luctigern who was the disciple of St. Ruadhan of Lothra, and this most probably was the person. Under him, St. Luchtigern progressed in studies, and in those virtues requisite for his promotion to the ecclesiastical state. Colgan alludes to him, as being mentioned in the Acts of St. Maccrecius. In the western part of Clare County, and rising near Lake Diilogh, there is a stream, which forms a boundary between the baronies of Ibrickane and Islands, for about two miles; then it runs across the barony of Inchiquin, and afterwards, in a north-westwardly course, it forms a boundary between the latter barony and Corcomroe. It has several tributary streams, and on its northern bank is seated the present town of Ennistymon, or Innistymon, over a singularly romantic reach of the river so called, where ledges of rocks obstruct the course, and over a succession of these, the waterfalls career through a valley, unrivalled for picturesque and scenic beauty. Here the present holy man chose a place for religious retirement and contemplation. 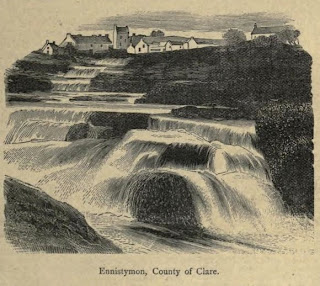 St. Luchtigherna is the reputed founder of Inistymon Abbey, in the parish of Kilmanaheen, barony of Corcomroe, and county of Clare. It is Latinized, Inistyniensis, or Inistomensis, and it is almost due-east of the signal tower, rising over the sea-shore, at Lahinch, on Liscannor Bay. Over this house, he exercised the duties of Abbot; and, he was held in the highest repute, owing to his great sanctity. He once made a visit to St. Ita, and to her establishment, at Hy-Conaill Gaura, in the county of Limerick; and, we are told, that on this occasion, he was accompanied thither by St. Lasrean, Abbot of Druimliag. Not knowing this latter person, the nuns suffered him to pass through their gate, without any marked token of respect. For such omission, they were mildly reproved by their holy Abbess, who told them his name, and the great reputation he bore for sanctity. Those Abbots were accompanied by a young man, who had previously advised them not to visit the old woman—meaning Ita. When the visitors approached St. Ita, to receive her blessing, having a miraculous knowledge of what had occurred, she said to the young man, "Why have you come to the old woman, since you have told those holy Abbots, it would profit them little to visit me ?" The young man felt deep regret, on account of his thoughtless expression; and, the visitors, having remained for three days with St. Ita, returned to their respective places of residence, having previously received her blessing. As St. Luchtigern was contemporaneous with St. Ita, who died A.D. 570, we might perhaps assume, that he departed before the close of the sixth century. The 28th of April is the festival day of St. Luchtigherna, and probably that of his death. It is entered, in the Martyrology of Donegal, that veneration was given, on this day, to Luightighern mac Ua Trato. It is he that dwelt at Tuaim-fionn-lociia, in Tratraighe, according to the O'Clerys. This ancient place is now known as Tomfinloe, or Tomfinlough, a parish in the barony of Upper Bunratty, and county of Clare. The denomination Tuaim Finlocha, signifies "the mound or tumulus of the bright lake." Besides this lake are seen the ruins of an old church. Previous to the middle of the tenth century, the death of a Scannlan, Abbot of Tuaim-Finlocha, is recorded. Among the various readings to the Feilire of St. Aengus, in the "Leabhar Breac " copy, at this date, we find the name of Lugtigern introduced, as already noticed. In the Martyrology of Tallagh, the name is merely recorded, at the 28th of April, as Lucthigern mac Cutrita. A Life of Maccreiche states, that it was there—at Tuaim-fionn-locha Luightigern was either buried or venerated.