On April 20 we commemorate Saint Sinach, a 7th/8th century abbot of Iniscloghran, the island monastery on Lough Ree founded by Saint Diarmaid.  Canon O'Hanlon has few details of Saint Sinach's career to bring us, but records the various sources where the details of his commemoration and the date of his death are to be found:

ST. SINAG, OR SINACH, OF INISCLOGHRAN, ON LOUGH REE, COUNTY OF LONGFORD.
[SEVENTH AND EIGHTH CENTURIES.]

THE entry of this saint's name, without any further distinction, occurs, in the Tallaght Martyrology, at the xii. of the May Kalends, or at the 20th of April. The Bollandists have not a notice of his name, at this day. On the River Shannon's noble Lough Ree, so beautifully diversified with islands, there is one of singular picturesqueness, formerly Latinized Inisense, or Insulense, and by the Irish called Inis Chlothrinn, said to have derived its name from Clorina, who was sister to Maeve, or Mab, Queen of Connaught... Here, in the sixth century, St. Diarmaid, or Diermit, chose his place of retreat, and he established a monastic institute, where several religious men placed themselves under his direction....If we are to credit Archdall, St. Sinach was an Abbot there; and, this account seems probable, as he has had annalistic commemoration. Of this saint, we know but little. His death, which took place, on the 20th day of April, A.D. 719, is recorded [in the Annals of the Four Masters]. This entry is not to be found, however, in the Annals of Ulster. In the Irish Calendar, now preserved in the Royal Irish Academy, his festival is recorded [as Sionach Innis Clothrann Anno. Dom. 719]. 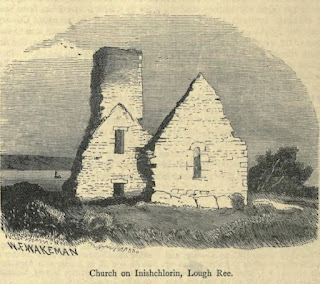 In the Linea Antiqua, Saint Sinech is listed as a son of Ronan, and brother to Saint Labair and Fornanan, the ancestor of O'Maolchonaire, Mac Con Midhe, and others, amongst the descendants of Maine mac Neill, who seems not to have been a genuine son of Niall of the Nine Hostages.

There are, of course, a number of saints who share the name Sinech.