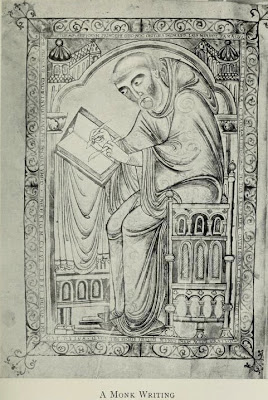 May 13 is the feast of an 11th-century saint associated with the County Down Kingdom of the Mournes, or Boirche, as it was originally called. Saint Tighernach was tutor to the famous chronicler monk Marianus Scottus and rejoiced in the title of 'chief anamchara of Ireland.' The following account of his life has been distilled from Canon O'Hanlon's Lives of the Irish Saints, Volume 5:

This distinguished and holy teacher was universally esteemed and beloved by the clergy of Ireland. The scene of his labours was but a small island, set in the bosom of the Atlantic; but, the seed he had sowed was destined to produce a harvest of souls among his pupils. This pious doctor is supposed to have been master to Marianus Scotus, and he is called the chief anmchara of Ireland. St. Tighernach—or as styled also by his disciple Tigernach Borchech—probably belonged to the eleventh century. Marianus Scotus declares, that from his superior Tigernach, he learned the cause of Amnchad's or Anmchad's exile, on the occasion of his having committed a slight fault. That superior of the celebrated chronologist is supposed to be identical with the present holy man. We are told, he was one of the Abbots of Bangor; yet, I cannot find his name on the list of Archdall, of Rev. Dr. Reeves, or of Dr. O'Donovan, when treating about that place. The Annals of the Four Masters relate, that a certain Tighernach Boircheach, chief anmchara of Ireland, was an anchoret and a successor of Finnen, Abbot of Clonard. By the postfix to the name Tighearnach, we are to understand, that he was of Beanna-Boirche Mountains, near the source of the Upper Bann, in the county of Down... Colgan states, that this Tighearnach was abbot over Clonard, where a celebrated monastery had been founded, in the sixth century. He was an anchoret, likewise, and a successor of St. Finnen, in that place.

We read from the Irish Annals, that in 1059, great diseases prevailed in Laighin, and which caused the death of a great number of persons there. This holy and learned servant of Christ died of the plague, in A.D. 1061. This is the date assigned by Tighernach, the Irish Annalist, for the great pestilence, which raged in Leinster, and which seems to have extended its ravages to other parts of Ireland. At the 13th of May, the Natalis of St. Tighernach, Anchoret and Confessor, in Ireland, is entered in the Kalendar of Drummond. On this day was venerated, as we find set down, in the Martyrologies of Marianus O'Gorman, and of Donegal, St. Tighernach, of Boirche.

Off hand I don't know. I am busy with exams right now but will look into this further when I have a chance. One thing that strikes me is that if your Saint Tiopraite is an early saint, this Tighernach is 11th century. Do you know of a feast day for Tiopraite?

Thank you, good of you, you can see it mentioned here. https://archive.org/stream/jstor-20608792/20608792#page/n1/mode/2up. My research since my post has advanced, its not now of importance to me. If you read the few pages at the link, all is speculation. I find that most of Hannas story is incorrect. Sorry its taken me some time to get back to you. Grateful Marcella.

No, thank you for bringing this saint to my attention. His feast is Dec 27 and is recorded in both the Martyrologies of Marianus O'Gorman and of Donegal. Problem seems to be that he is not the only one of this name and there is more than one Magh Rath. I will try to find out a bit more and make a post on Dec 27.