On June 6 we commemorate the memory of a County Kildare female saint, Cocca (Coca, Coc). Although there is no surviving Vita her memory has lived on in the parish of Kilcock, 'Cocca's church' and in the dedication of a holy well. Interestingly, in one of the footnotes to his account of Saint Cocca, Canon O'Hanlon records that the 17th-century hagiologist, Father John Colgan, was given a list of the churches of County Kildare which showed that her memory had been displaced by that of Saint Gall. Be that as it may, by the time of Canon O'Hanlon a new Catholic church had been built at Kilcock and dedicated to the patroness of the parish. Much of the latter part of his account is taken up with a description of the building but I have omitted this. As O'Hanlon's account below will also make clear, Cocca of Kilcock is not the only saint to bear this name and it is one which, according to Colgan, she shares with the reputed nurse of Saint Ciarán of Saighir. Another writer, Father Comerford, whose account of Saint Cocca can be read here draws on other traditions that she was a sister to Saint Kevin of Glendalough and to Saint Attracta and that she had embroidered vestments for Saint Columba! 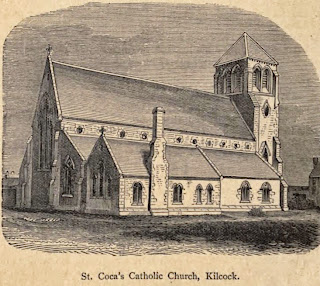 That the present holy woman flourished, at an early period, can hardly be doubted; although it is difficult,for want of satisfactory proofs, to furnish authentic statements, even regarding her identity. What seems certain is, that she lived—most probably long—before the eighth century, when we have a passing record of the place— named Kilcock after her—in our Irish Annals. It means "the Church of St. Coc," or as Latinized Ecclesia S. Cocceae. Its locality gave name to a parish, within the present barony of Ikeathy and Oughterany, in the county of Kildare. Incidentally, Father John Colgan introduces a St. Cocca, as the nurse of St. Kieran, Bishop of Saigir; but, it cannot be ascertained, that she was the same as that holy woman, whose festival is recorded, at this date. Assuming the Patroness of Kilcock to have been in early years the nurse of St. Kieran, a gentleman well versed in Irish ecclesiastical and profane history has furnished the writer with elaborate notes, referring to St. Cocha and to Kilcock. He suggests, that as she acted in that capacity, St. Cocca may have accompanied St. Kieran to Rome, where he received from the Supreme Pontiff permission to preach the Gospel in Ireland, even before the coming of St. Patrick, its great Apostle. The Bollandists have a notice of this holy virgin, at the 6th of June, but they express only a desire to learn more regarding her, than has been stated by Colgan. The name and feast of St. Choca, virgin, in the province of Meath, Ireland, is commemorated, at the 6th of June, by Chastelain, and also, in Right Rev. Bishop Challenor's "Memorial of Ancient British Piety." Already, at the 8th day of January, we have given some notices of a St. Cocca, Cucca, Cuach, or Cuaca, who is called a Virgin of Cill-Cuaiche—said to have been in Cairbre-na-Ciardha—identical with Kilcock, in the north-western part of Kildare County. However, her chief festival seems referable to this date. Again, there was a St. Cuach, or Coiningean, a Virgin, of Fionnmagh Church, and said to have been of Killeen Cormac, county of Kildare, whose feast occurs, at the 29th of April. She flourished, in the fifth or sixth century; and, it has been supposed, she was identical with the Patroness of Kilcock. Indeed, the time, place, and circumstances, concerning her, render it possible enough; however, this is still only a matter for vague conjecture. An Irish comment is added in the table subjoined to the Martyrology of Donegal; and, the writer of it supposes this present saint to have been the nurse of St. Kieran, Bishop of Saigir. However, he advances such an opinion with doubt. Now, as St. Kieran was born in the Island of Cape Clear, off the remote southern coast of Ireland, it seems likely his nurse Cochoea belonged to the same region; but, at all events, she was afterwards placed over the monastic institute of Ross-Bennchoir, near the western sea of Ireland, which was very far removed from Saigir. The present holy woman, we suspect, must be distinguished from that St. Cocha or Cocca, of Ros-Bennchair, who was nurse to St. Kiaran of the former place. This is also the opinion of Father John Colgan. We can only observe, that the present holy virgin is recognised and distinguished as patroness of Kilcock, on the borders of the county of Meath. The localities already alluded to are far distant from each other, having apparently no connexion.

In the Introduction to the O'Clerys' Calendar, we are informed, that Cill-Choca is in Meath. When this holy virgin settled there is unknown; but, it is thought, that she presided at Kilcock over a community of nuns, in quality of Abbess, and local tradition has it, that a religious house formerly stood on the spot, lately occupied there by the National School. The Parish Register styles this locality Parochia Sanctge Cogae, while the former church was called Ecclesia Assumptae Virginis de Kilcock...Although the memory of St. Coca was displaced, in former times, to introduce that of St. Gall, still there were local memorials, such as Tubbermohocca, or the Holy Well of Chocca, to perpetuate her celebrity. It sprang as a stream, in what is now an enclosed yard of the town. Kilcock also extends as a town land into the adjoining parish of Rodanstown, in the barony of Upper Deece and county of Meath. In the county of Kerry, there is a townland of Kilcock, divided into the distinct denominations of Upper and Lower. A townland is called Kilcock, in the county of Roscommon, as also a Kilcoke in the Queen's County, and in the North Riding of Tipperary but, we cannot state if any of these were called after this holy virgin. With regard to the present saint, an entry is found in the Martyrology of Tallagh, at the 6th of June. Moreover, a feast in honour of Cocca was celebrated, on this day, as we read, likewise, in the Martyrology of Donegal. Her festival is noticed by Archdall, at the same date; but, we find it impossible to throw further light on her history or period.