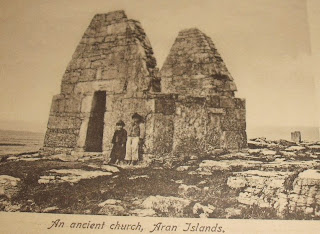 At June 14 the Martyrology of Oengus has an interesting gloss on its entry for the day for a Saint Nem, who appears to share his feastday with the commemoration of a translation of the relics of Saint Benedict:

14. Both of them meet on the same festival,
a hostful sea!
Nem the vigorous descendant of Bern,
with Benedict the victorious.

14. Nem, i.e. a pope who is in Aran, and he is a successor of Enda of Aran, and of the Dal Birn of Ossory he is, and a brother of Ciaran of Saiger. Nem great-grandson of Bern. He was called by three names, to wit, Nem and Pupu and Cailbe. Nem primum nomen etc. Whence Senan of Inis Cathaig sang Abbas almus amabilis etc. A successor of Peter and Paul, Cailbe came from the east from Rome, Nem, great-grandson of Bern, a bright brother, whose name is Pupu of Aran.

I was grateful to be able to turn to the latest reference work, Pádraig Ó Riain's A Dictionary of Irish Saints, to make sense of this multi-named saint. There I learnt that several chapters of the Life of Saint Enda of Aran, dealing with a sojourn in Rome, feature Pupa (Pupu), a name said to derive from Papa, 'Pope' which was also used to describe Irish hermits in Iceland. Another source says that Nem/Pupa had abandoned the papacy to retire to Inishmore, which is a charming notion. As we have seen above, the scholiast on the Martyrology of Oengus portrays Nem/Pupa as the successor to the great Saint Enda and claims that he was a brother to Saint Ciarán of Saighir. The three names mentioned in the Martyrology are thus

2. Pupa - because of his quest for the chair of Peter.

Nem/Pupa also features in the Life of Saint Brendan, where he appears, along with Saint Enda, as one of the well-wishers seeing off the Navigator of Clonfert at the start of his famous voyage. As the Martyrology also mentions, Saint Senan is made to declaim a Latin quatrain beginning Abbas almus amabilis, in praise of Saint Nem. Thus is this 'Pope of Aran' honoured within the Irish sources, although he seems to be an obscure figure today.