Last year on January 23 I posted on the life of Saint Maimbod, an Irish missionary to Europe who met a martyr's death. The other saints with whom he shares his feastday are all much more obscure figures. Among them is a saint commemorated in the Martyrology of Tallagh as 'Mocelloc o Thilaig Ualann.' O'Hanlon tells us that the name of this place occurs twice in the Annals of the Four Masters but that the editor, John O'Donovan of Ordnance Survey fame, was unable to identify this place with any modern location. The saint, of whom nothing more seems to be known was also commemorated in the Martyrology of Donegal as 'Mocheallog, of Tualach Ualann'. O'Hanlon himself felt that this location was probably Tullyallen in County Louth: 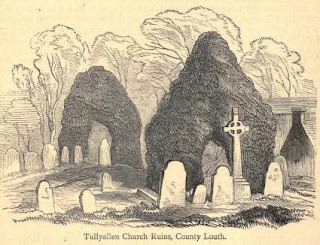 The Martyrology of Tallagh mentions Mocelloc o Thilaig Ualann as having been venerated on the 23rd ofJanuary. Although the name of this place occurs twice in Dr. O'Donovan's " Annals of the Four Masters," yet has it eluded identification with any modern locality, even after the learned editor's research.'' Mocheallog, ofTualach Ualann, is entered in the Martyrology of Donegal,s as having a festival at this date. To the writer, it would appear, that this saint's ancient place may now be found under the modern designation of Tullyallen, a parish chiefly in the barony of Ferrard, county of Louth, but partly in that of Upper Slane in the county of Meath. The old graveyard and ruined church are situated near a rivulet, which trickles down through King William's Glen, and joins the Boyne river, near the obelisk and newly-constructed bridge. The situation is a very elevated and beautiful one, while an ancient road leads from it down to the site of the famous battle. The graveyard is a favourite place for burial, and fine ash trees surround it. The old church measures 65 feet in length interiorly, and 18 feet in width, while the walls are about 2 feet 6 inches in thickness. Two gables, richly mantled over with ivy, still stand ; the side walls only peer a little over the ground level. The doorway in the west gable had been much broken, but it is repaired with modern masonry. In the other gable, the lower part of an eastern Gothic window is broken, but in the upper part some traces of fine mullions are seen.
Content Copyright © Omnium Sanctorum Hiberniae 2012-2015. All rights reserved.