The Seven Bishops of Aelmagh, August 23 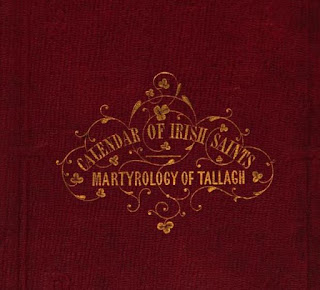 August 23 is the commemoration of a group of bishops on the earliest of the surviving Irish calendars, the Martyrology of Tallaght. It is one of a number of entries which group individuals in this way, in his account below Canon O'Hanlon believes it reflects the use of sacred numbers in a Christian context. We do not know much about these particular bishops, Canon O'Hanlon wonders if they are also mentioned in the Litany of Aengus which can be read on the blog here.

The Seven Bishops of Aelmhagh, i.e. at Donihnachmor, probably in the County of Leitrim.

The mystic number seven marked some of the most important events and regulations among the Jews. Thus, the seventh day was the Sabbath; the seventh year was the sabbath of the land, in which the people were commanded not to sow the land, nor to prune the vineyards. And again, when seven weeks of years—(i.e. forty-nine years)—were past, the people were ordered to hold the jubilee on the fiftieth year, when "remission was to be proclaimed to all the inhabitants of the land." But, it is needless to multiply examples from the Old Testament, where the word occurs nearly one hundred times, as a sacred and peculiar mode of enumeration. So are we struck with the use of the word seven, in our old Litanies and Calendars. It is entered in the published Martyrology of Tallagh, that veneration was given at the 23rd of August, to Sect— Septem—nesp. Domnaighmoir, Elmaighi. Somewhat differently is this entered in the Book of Leinster copy of the Martyrology, at the same date. This place, or its equivalent, Aelmhagh, signifying "Plain of the Lime," was in Calraighe; but, we are not told, in which of the many districts thus called in Ireland it had been situated. There were several tribes called Calraidhe or Calry, and so noticed as being descended from Lewy Cal. The names of the places so called serve to perpetuate the memory of those clans. Thus, one of them settled in the ancient Tenia, and the denomination is locally preserved in Slievegolry, near Ardagh, in the County of Longford. Moreover, Calry, in the County of Sligo, and it is thought Calary in Wicklow, still preserve the names of those tribes. Although in the notice of Aelmhagh, at A.M. 3790, Dr. O'Donovan does not attempt to identify Aelmhagh, in Calraighe; yet, when he meets an account of the Calraighe of Aelmhagh, at A.D. 781, he says, this Sept was probably one, otherwise called Calraighe-an-Chala, and seated in the barony of Clonlonan, in the County of Westmeath.

Under the heading of Domhnach-mor-Aolmaighe, Duald Mac Firbis records the seven bishops of Domhnach-mor-Aolmaighe, at August, 23rd. In that old Irish Litany, ascribed to St. Aengus, there is an invocation of the seven bishops of Domnach Calliraigi—most probably referring to those of Aelmaighe, although the latter denomination has not been introduced. The history of those bishops we are unable to unfold; nor is it possible for us to state when they lived, or if all had been contemporaries. It seems most probable, however, that they were commemorated, as having passed out of this world, in successive periods, and as having been buried subsequently in the place which has been mentioned. We are assured by Duald Mac Firbis, and by his learned Irish topographical commentator, that Domhnach-mor-Aelmhagh or Aolmaighe is in Breifne-O'Ruiarc; and consequently, that it is now known as Donaghmore, in the barony of Dromahire, and County of Leitrim. We find recorded, likewise, in the Martyrology of Donegal, at this same date, The Seven Bishops, of Aelmhagh, i.e., at Domhnach-mor.

Greetings from Ireland and thank you.