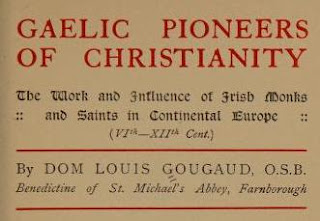 The month of October ends with the commemoration of an Irish saint still remembered in Belgium - Faolán (Foillan, Feuillen, Pholien), who founded a monastery at Fosses and was a brother of the noted Irish missionary saint and visionary, Fursa. Like Saint Donatus of Fiesole who is also commemorated this month, Faolán too was a promoter of the cult of Saint Brigid of Kildare in his adopted homeland. Dom Louis Gougaud gives the following short account of him:


In the footsteps of St. Fursa (+ c. 650) and of his two brothers Foillan and Ultan, whom the Belgians call Feuillen and Ultain, one treads on more solid ground. The official cult of Fursa goes back to Merovingian times. He is the patron of Peronne, where his tomb is preserved, and of seven other parishes of the diocese of Amiens. Several chapels and wells also keep alive his memory in Picardy.

The tomb of St. Fursa was a spot beloved by Irish piety. Foillan and Ultan were among the first to cross the sea to visit it as pilgrims. Foillan did not stay long in the monastery of Peronne; soon he went to dwell at Nivelles, another place where the Scotti were personae gratae.

Foillan received as a gift from Itta, wife of Pipin II, Mayor of the Palace, and mother of St. Gertrude of Nivelles, the land of Fosses on which he founded a monastery. He perished, murdered by brigands, in the forest of Seneffe.

The town of Fosses still holds his memory in high veneration. Every seventh year it celebrates, amid a great concourse of pilgrims and much ceremony, the procession or march of St. Foillan. The neighbouring places send as their delegates armed "compagnies." It takes nearly the whole day to bear the bust of the saint over the traditional course. At each station -of which there are seven- the "compagnies" fire a salute.

Liege, which has a church dedicated to St. Brigid, has another under the invocation of St. Foillan, as have also Omezee and other Belgian towns and villages. Devotion to St. Foillan has even reached Aix-la-Chapelle where a parish church and a guild, both very old, are placed under his patronage.

A more recent examination of the work of Irish saints in Europe by scholar Roísín Ní Mheara, found that apart from the septennial celebratory march in honour of the saint mentioned by Dom Louis, there are many other traces remaining of Saint Foillan:


Faolán was returning to Fosses after visiting his brother Ultán for the feast of St Quentin when he fell into the hands of marauders in a wood near Le Roeulx. Tradition affirms that after a search of two months it was St Gertrud [of Nivelles] herself who discovered Faolán's incorrupt body. With a great display of pomp and mourning the bier was carried by the nobles back to Nivelles. Gertrud had a church built in Le Roeulx with a priory for Irish monks. This was later taken over by Fathers of the Augustinian Premonstratensian Order, who were thrown out in the course of the French Revolution. All we find in Le Roeulx today is a parish church with a side-altar dedicated to St Faolán. It also posseses a relic of the Irish martyr.

Faolán had founded the royal abbey of Fosses in 635 and in 1083 his martyred relics were translated there. Roísín Ní Mheara describes some of the other features of the church at Fosses:


In Fosses itself there are many items to arrest one's attention in what is now the parish church of Saint-Feuillen. A tableau at the altar of St Ultán depicts the legend of the bloodstained dove bringing news of Faolán's murder to his brother in Saint-Quentin (a reminder of the visionary gift Ultán shared with his brother Fursa). All three brothers are shown in one of the tableaux in the choir, being christened in Ireland by St Brendan.

Saint Faolán is commemorated on the earliest surviving Irish calendar, the Martyrology of Oengus, on October 31:

31. Quintinus fair, crucified;
Faelán, with many bands,
they declare, with a host
of fathers, the lofty end of
October.

to which the notes add: