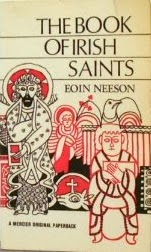 One of the saints, commemorated on October 27 in the Martyrology of Oengus as 'Abbán an abbot fair and train-having', presents us with something of a mystery as to his identity. One problem is that as the scholiasts' notes make clear, the lifespan of this saint was said to have exceeded three hundred years:

Seventeen pure-shaped years, in addition to the number three-hundred, the age of Abbán, shapely lord, while he was in the body.

This plus the extraordinary number of churches which claim Abbán as founder, has led many writers to speculate that there must have been more than one saint of this name, even though the sources try to present a single individual, Abban of Kilabban, a nephew of Saint Ibar, whose feast is commemorated on March 16. Writer Eoin Neeson attempts to clarify the matter:

ABBAN of Moyarney, County Wexford. An abbot who has been confused with Abban of Killabbban in Laois and whose feast-day is on March 16. They may have been the same individual, but there is no certainty either way. Tradition would suggest that there were two Abbans, while holding that there was only one; but if so he must have been singularly long-lived for he died in 630, yet is reputed to have preached before the coming of Patrick (432). It is probable that there were two Abbans, to-day's being the latter. He was of royal blood and, indeed, was imprisoned by his father because he chose the Church rather than the local kingship. He is invoked against shipwreck.