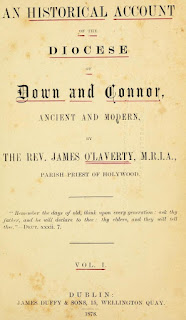 October 18 is the commemoration of a County Down saint, Moluainn of Killmologue in the Mournes. The Martyrology of Donegal records:

The diocesan historian, Father James O'Laverty, brings the following account of Saint Moluainn and includes some interesting footnotes. I wonder if there is still such a 'wonderfully well preserved' site at this location, it certainly sounded quite impressive when the author was writing in the 1870s. There is a picture of 'Saint Macquilla's well' in the undated reminiscences of an 'old timer' here which appears to relate to the same locality but this account says that there is now no trace of the shrine mentioned by Father O'Laverty. Our saint does not feature in the work of Bishop William Reeves on the dioceses of Down, Connor and Dromore, so Father O'Laverty's is the only information I have available:

In the townland of Ballyveaghmore there is a place called Killmologe; the people have lost every tradition regarding it, yet the place is considered gentle, and it is therefore wonderfully well preserved. Killmologe signifies the church of St, Luan or St. Lua.* There are many saints of that name St. Bernard mentions in the life of St. Malachy a St. Luan, who studied in Bangor, and afterwards founded one hundred monasteries. The patron of Killmologe is more probably St. Moluainen of Tamlaght in Boirche (Tamlaght in Upper Mourne), whose festival, according to the Martyrology of Donegal, was observed on the 18th of October. Killmologe is a space of ground nearly circular, containing almost a statute acre, its diameter being 240 feet. It is surrounded by a high ditch which is formed by banking up the clay which was taken from the trench on each side of it. The ditch is faced and topped with great stones embedded in the earth. This enclosure has two gates or openings, one to the east and one to the west. On entering the enclosure by the western opening there is, on the left side, what seems to have been a well, and a little farther on a large stone is met, having a cup shaped hole hollowed out of it, which may have been used for holding Holy Water, or perhaps for crushing the corn used for food. On the southern side of the enclosure are three circles of stones embedded in the clay, they seem to be the foundations of rude buildings. One of them which is better defined than the others has a narrow opening on the south side towards the fosse. Near the eastern opening, but towards the south side of it, there are the traces of a rude square building. Outside the circumvallation on the north side there is a large flat stone, in which are scooped two hollows, similar to what in other parts of the country are said to be the marks made by the knees of a saint. This venerable spot, surrounded by what in ancient times was called a Cashel, is exactly similar to an ecclesiastical establishment described by the Venerable Bede as erected about the year 676, in the island of Fame, near Lindisfarne, by St. Cudbert, an Irishman, who had been trained to monastic discipline in Iona.—" Now this dwelling-place was nearly circular, in measure from wall to wall about four or five perches. The wall itself externally was higher than the stature of a man; but inwardly, by cutting the living rock, the pious inhabitant thereof made it much higher in order by this means to curb the petulance of his eyes, as well as of his thoughts, and to raise up the whole bent of his mind to heavenly desires, since he could behold nothing from his mansion except heaven. He constructed this wall not of hewn stone, nor of brick and mortal, but of unwrought stones and turf, which he dug out of the place. Of these stones some were of such a size that it seemed scarcely possible for four men to lift them; nevertheless it was discovered that he had brought them from another place and put them on the wall assisted by heavenly aid. His dwelling place was divided into two parts, an oratory namely and another dwelling suitable for common uses. He constructed the walls of both by digging round, or by cutting out much of the natural earth inside and outwardly, but the roof was formed of rough beams and thatched with straw." — Life of St. Cudbert by the Venerable Bede. An enclosure, such as Killmologe, surrounding a group of ecclesiastical buildings, when it was built of stone or of earth faced with stone was termed a Cashel, and sometimes a Cahir ; they were in imitation of the fortresses in use among the pagan Irish, and frequently they were pagan fortresses tliat were given up to the clergy. Killmologe may have been Cathair Boirche, the princely residence of Eochaidh Salbhuidhe, before it fell to the possession of St. Moluainen.+


* Moluainen is equivalent to My dear little Luan. An Irish way of saying St. Luan. The Irish used the diminutive of the name of a saint as a mark of affection and prefixed Mo-my as an expression of devotion ; the diminutives an, in, og, were often postfixed, thus the name, Aodh by this process is changed into Mo-Aodh-og (Mogue), while Luan becomes Moluainin and Molog.


+ An ancient poem preserved in the Martyrology of Donegal describes St. Becan when he was visited by St. Columbkille and the Monarch of Ireland, as engaged in erecting a similar structure.

Making a wall praying
Kneeling, pure prayer,
His tears flowing without unwillingness
Were the virtues of Becan without fault.


Hand on stone, hand lifted up,
Knee bent to set a rock.
Eye shedding tears, other lamentation.
And mouth praying.