The Larks of Glendalough 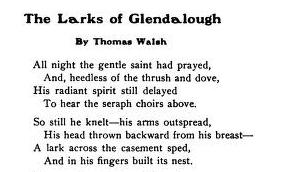 June 3 is the feast of Saint Kevin of Glendalough, a saint in whom there has been a revival of interest in recent decades thanks to his status as a poster boy for 'Celtic Christianity'. This movement claims that our native saints were especially in tune with the natural environment and as a result enjoyed a special relationship with the animal creation. And no anthology of 'Celtic Christianity' is complete without a reference to one of the most famous episodes from Saint Kevin's hagiography - the sheltering of a nesting bird in his outstretched, praying hands until her young have fledged. It is a theme which has also inspired poets (including the late Seamus Heaney), and below is a 1905 example, The Larks of Glendalough, by Thomas Walsh. It is striking that Walsh has chosen the lark here for most retellings of this tale, which originated in the History and Topography of Ireland by the twelfth-century chronicler, Gerald of Wales, identify the avian as a blackbird. I am left wondering therefore if Walsh has conflated the story of the blackbird which nests in Saint Kevin's palm with another legend of Glendalough which seeks to explain why the song of the lark is never heard over the site. This lark legend is bound up with the construction of the Seven Churches of Glendalough and here it is as told to a mid-nineteenth-century traveller to Ireland by his guide, a Mr. Winder:

Among the portentous events that my friend Mr. Winder told me was this,— that for 1,300 years the skylark had never been heard to warble over the lake, because St. Kevin prayed that it might never have the power to do so; and the reason was, that the men who were building the city where the Seven Churches stand had made a vow to commence their work each day as soon as the lark rose, and not to leave off till the sun had set. They kept their vow, and were in consequence so worn out with fatigue, that many of them died; when St. Kevin, out of compassion, offered up his prayers that no lark should henceforth rise into the air — the prayer was granted, and 'the plague was stayed.' All this is firmly believed. Subsequent to this, a man, who was driving me in a jaunting-car, told me that it was as true as we were sitting in the car that the skylark was never heard to warble over the lake for 1,300 years, though it was heard commonly outside the Seven Churches, at the distance of a few hundred yards. I asked him, if he did not think that skylarks preferred warbling over cornfields rather than over lakes?"

The tourist's illustrated hand-book for Ireland, (London, 1854), 42.
The lark legend thus seems quite distinct from that of Saint Kevin and the Blackbird. I have not been able to find out any more about our poet Thomas Walsh but, whether or not he has confused his Glendalough bird legends here, his poem at least has the merit of depicting Saint Kevin as someone engaged in the monastic life. Indeed, Walsh seems to be describing Saint Kevin using the ancient prayer posture known as crois-fhigill, cross-vigil, where the arms are outspread in imitation of Christ's position on the cross. Overall, although it is typical of the sentimental verse published in the popular religious press of this time, I find The Larks of Glendalough charming:
The Larks of Glendalough
By Thomas Walsh
All night the gentle saint had prayed,
And, heedless of the thrush and dove,
His radiant spirit still delayed
To hear the seraph choirs above.
So still he knelt — his arms outspread,
His head thrown backward from his breast —
A lark across the casement sped,
And in his fingers built its nest.
The angel music from his soul
Receded with the flood of day;
Through Glendalough the sunlight stole
And brushed the mists and dews away.
’Twas then the saint beheld the bird
Serenely nesting in his hand,
And murmured, “Ah, if thou hadst heard
The matins in that seraph land!”
Then, soft again he turned to pray;
Nor moved his arm at even close
Or matin call from day to day
Until their nestling voices rose.
And when his loving task was done,
Above his cell he heard them cry: —
“O Kevin, Kevin! Gentle one !
We bear to heaven thy soul’s reply!”