Feast of the Ordination of Saint Patrick, April 6 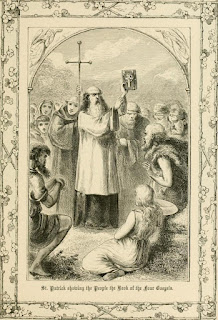 Following on from the April 5 commemoration of Saint Patrick's first baptism in Ireland, on April 6 we mark the feast of the ordination of our national apostle. Canon O'Hanlon comments:

The Bollandists merely notice this Feast. The Martyrology of Tallagh records, at this date, Ordinatio Patricii. Whether this entry, meaning, "the Ordination of St. Patrick," refers to his sacredotal ordination, or to his Episcopal consecration, cannot be exactly determined. It is probable, however, it must be coupled with the latter, as more in accordance with ecclesiastical usage.

Even at the present time, it is customary, to commemorate the anniversary of a Bishop's consecration, by a prayer, added to the Mass, offered on that day, within his own diocese. In the published Martyrology of Donegal, the editor remarks in a note: The more recent hand adds here, 'Ordinatio S. Patricii, Mart. Taml,' as if it were deemed by the writer a matter of importance, to supply an obvious omission of the compilers.