Bi-Centenary of the Birth of Canon O' Hanlon 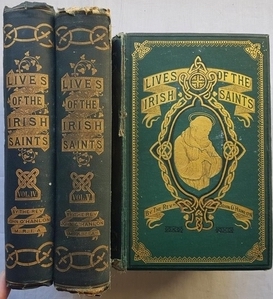 Today marks the bi-centenary of the birth of John, Canon O'Hanlon whose monumental Lives of the Irish Saints provided the original inspiration for this blog. Over the years I have developed not only a profound respect for his work but also a deep affection for the man himself. I marvel at how he was able to undertake such detailed research into the Irish saints while exercising the duties of a parish priest and producing volumes of history and poetry as well. The article below, published in the Irish Monthly shortly after O'Hanlon's death in May 1905, pays a handsome tribute to his literary output. I can only concur though with the writer's observation that he would have sacrificed the re-publication of the Irish Amercian History in order to secure the publication of the remaining volumes of the Lives of the Irish Saints. For sadly, the Lives for the last three months of the year were still in manuscript form at their author's death and there they have remained. But on the occasion of the bi-centenary of his birth I salute Canon O'Hanlon for all that he achieved and hope he enjoys eternal rest among the saints of Ireland whose memories he did so much to recover and preserve. 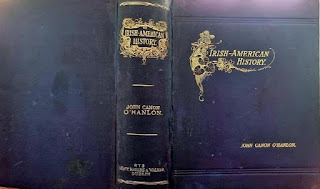 Canon O'Hanlon deserves pre-eminently the title which Dr Russell of Maynooth gave to Dr Matthew Kelly, calling him (in the inscription on certain statues of Irish Saints, presented by him to the College) sanctorum indigetum cliens devotissimus. He was born at Stradbally, in Queen's County, in 1821...When seventeen years of age, he emigrated to America. In his twenty-sixth year he was ordained priest by the Archbishop of St Louis, Peter Richard Kenrick. After doing priestly duty at St Louis for seven years, his health failed, and he was obliged to return to his native country. Cardinal Cullen appointed him to a curacy in the parish of SS. Michael and John's, Dublin; and there he remained till he was made parish priest of Irishtown - now after his death divided into two parishes, Ringsend and Sandymount.

It is on record that Dr Walsh, the present Archbishop of Dublin, often served Father C.P. Meehan's Mass as a boy, and no doubt he did the same of Father Meehan's fellow-curate. One of Dr Walsh's first acts as Archbishop was to name Father O'Hanlon to a canonry in the Cathedral Chapter. Canon O'Hanlon spent the rest of his life beside his beautiful church of St Mary Star of the Sea. We remember how pleased he was when we told him that the author of the favourite hymn, "Hail, Queen of Heaven", in which that title is given to our Blessed Lady, was Dr Lingard the great historian. As a priest and as a man, he was full of zeal and kindness; and he was indefatigable in the discharge of all his priestly duties.

But he was indefatigable also in the one department of literature to which he was wise enough to devote himself almost exclusively. He had indeed tried his prentice hand on other subjects at the beginning of his career, publishing in 1849 at Boston, An Abridgment of the History of Ireland through Patrick Donahoe, founder of the Pilot and Donahoe's Magazine, both of them carried on still on a finer scale and with greater success than in the time of the founder. In 1851 he published The Irish Emigrant's Guide to the United States. Would that more of those emigrants would imitate his example and return to do good work in their native land.

His real work, however, as a writer began after his return to Ireland. In 1855 he published the life of St Laurence O'Toole, which was followed by Lives of St Malachy O'Morgair, St Dymphna and St Aengus the Culdee.  These were the preliminaries to his colossal enterprise, The Lives of the Irish Saints, for which he had been collecting materials for twenty years before he issued his prospectus. This work was issued in parts containing sixty-four pages, illustrated with pictures of ancient Irish Churches, etc; and these were gathered into very fine royal octavo volumes of between 600 and 1000 pages each. In spite of great difficulties he persevered to the end, issuing the November volume last year; and it is understood that the materials for the December volume are ready for the press. It is a pity that the good Canon had not realised even more fully that reward of the faithful confessor complevit labores illius, by issuing the concluding volume of his opus magnum. To secure that completion we could have spared his excellent Irish American History of the United States, which at the age of seventy-seven he had the courage to write out again after it had been burned in the fire that destroyed the printing works of Messrs. Sealy, Byers and Walker, in 1898. It was published two years ago.

The holy and amiable old man died peacefully and happily on May 15th, 1905, Feast of St. Dympna, one of 3,500 Irish saints of whom he was the historian. May he rest in peace.

Email ThisBlogThis!Share to TwitterShare to FacebookShare to Pinterest
Labels: Hagiologists

Faithful Irish Exiles- Pioneers of the Faith in Many Lands

April 10 is the feast of Saint Paternus of Paderborn, one of many Irish or reputedly Irish holy men who left this country for continental Europe. I say reputedly as many of the claims of Irish links for saints such as Rupert and Arbogast cannot be substantiated although with Columbanus, Fiacre, Virgil etc. we are on firmer ground. Their legacy was a source of pride to Irish writers during the nineteenth and early twentieth centuries and below is an extract from an article on this theme by Magdalen Rock, syndicated from the Catholic Herald by the New Zealand press in 1923. Magdalen Rock was a pseudonym of County Tyrone schoolteacher Ellen Beck (1858-1924). She was a prolific contributor to the religious press of her day and I am pleased to preserve both her own memory and her legacy of writings on the Irish saints here at the blog.

Pioneers of the Faith in Many Lands

(By Magdalen Rock, in the Catholic Herald.)

Saint Patrick came to Ireland in 432, and in the next century Columba, led by remorse or by the missionary spirit that to the present seems characteristic of the Irish race, left his own loved land to found the famous monastery of Iona, from which Scotland and Northern England were brought and re-converted to the knowledge of the true God. Irish bishops governed the See of Lindisfarne; an Irish monk founded old Melrose; Adamnan, the biographer of Columba, is among the best Latin writers of the Middle Ages.

Towards the close of the same century, Columbanus departed from Bangor, with twelve companions, to found Luxeuil and Bobbio; the memory of Saint Gall survives in Switzerland, where a canton bears the name of one of the most earnest of Columbanus’s disciples. Saint Frigidan was Bishop of Lucca for twenty-eight years of work and miracles; Livinus died a martyr in Flanders in 633; Saint Fiacre, who flourished about the same time, founded a monastery near Meaux, in France; Saint Fursey, whose visions gave Dante inspiration, died venerated by all in 648, after founding a monastery in East Anglia, and a more enduring one at Lagny, near which Saints Folian, Gobban, and Dicuil died in the odor of sanctity.

Saint Arbogast was Bishop of Strasburg in 646, and another Irish saint, Cathaldus, ruled in far-distant Taranto; Fridolin the Traveller founded monasteries in France and in the islands of the Rhine; Saint Virgilius, whose scientific opinions startled the world, was Bishop of Saltzburg in 785, and another, Dicuil the Geographer—flourished about the same period, and is said to have visited Iceland.

Saints Donatus and Andrew are the pride of Fiesole, as Saint Rupert and Marianus Scotus are of Ratisbon; Clemens and Albinus delighted the scholars of the court of the great Charlemagne, while the wonderful learning and eccentric genius of John Scotus Erigena, who combined scholastic and mystical theology, drew on him praise and blame.