February 20 is the feastday of Saint Colga the Wise, lector at Clonmacnoise, reputed teacher of the English saint Alcuin and author of a famous prayer known as the Scuab Chrabhaidh (Broom or Besom of Devotion). I was interested to see that in his entries for this day in Volume II of his Lives of the Irish Saints Canon O'Hanlon does not begin with this famous Saint Colga but with another, lesser-known abbot of Lusk, County Dublin, who shares the same name. Indeed, it seems that Colga of Lusk is assigned this feastday by the 17th-century hagiologist Colgan, simply on the grounds that this is the day when his Clonmacnoise namesake is commemorated: 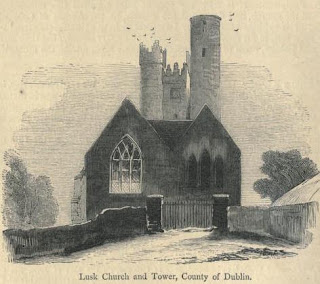 EVERY step, taken in religious progress, tends to purify and to ennoble a monk's profession. Nor can it fail to impart a generous and an honourable impulse, in the home of his choice. Colgan acknowledges his inability to discover any important biographical particulars, regarding this saint, with the exception of a few, which are entered in his collection. The Bollandists and Dr. Lanigan have only a passing allusion to him. It is supposed, that our saint was son to Moenaegh, and that he presided over the monastery of Lusk, as abbot. This establishment is thought to date back so far as before the close of the fifth century, when St. MacCuilinn or Macculind, its founder, is said to have died. The place is certainly most ancient, and it has many historic associations of very great importance. In the old graveyard may still be seen a very perfect specimen of an Irish round tower, attached to a mediaeval church, which has lately undergone restoration, in a very excellent style of Gothic architecture. No doubt, a more ancient church occupied this site. This holy man flourished about the year 690, or even later ; for, he is named, as one of those who subscribed with other prelates of Ireland, to the Acts of a synod, held by Adamnan, about the year 695 or 696. A copy of these decrees, called the Cain Adhamnain, or the "canons of Adamnan" had been in Colgan's possession. He has also placed on record some of the subscribers' names, to these statutes. Wherefore our saint was not identical with one bearing a similar name, and exercising a like office, in the same place, and whose death occurred A.D. 782, according to the Annals of the Four Masters. The Colga, who died in 782, or more correctly, 787, is expressly named in our Annals, as son to Crunnmail. The present St. Colga did not long survive the year, in which the celebrated synod of Adamnan had been held  for, we read, about the death of his successor, an abbot of Lusk, who departed this life, in the year 731. The present holy man died, probably, near the beginning of the eighth century ; nor do we know what reason, his namesake, Father John Colgan, had, for giving him a festival at this date, beyond the circumstance of another celebrated Colga or Colgu having been venerated on the 20th day of February.
Posted by Marcella at 06:30