The Feast of the Dispersion of the Apostles, July 15 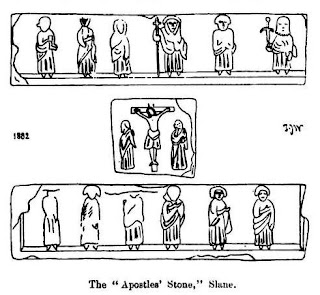 On July 15 Canon O'Hanlon notes the recording, in the Martyrology of Aengus, of The Feast of the Dispersion of the Apostles. This feast marks the dispersal of the Holy Apostles to their various missionary destinations, but in some of the copies of Saint Aengus's calendar a list of not only the biblical Twelve Apostles is appended, but also a list of the 'Twelve Apostles of Ireland'. This was a name given to a group of early saints, presented as students of Saint Finnian of Clonard, who themselves dispersed to various parts of Ireland to evangelise this country. Some of them are also credited with founding missions outside of Ireland. In the account below I have transferred the actual quotations from the Martyrology out of the footnotes and into the main body of Canon O'Hanlon's text. I have also added some notes on the identities of the Irish Twelve:

Festival of the Twelve Apostles.

In the ancient Irish Church, on the 15th day of July, was celebrated the Festival of the Twelve Apostles, as we read in the "Feilire" of St. Aengus. In the "Leabhar Breac" copy is the following Irish rann, translated into English, by Whitley Stokes, LL.D.

"The twelve Apostles who excel every number,
before a countless host
Jesus distributed them among Adam's seed."—

There is an Irish stanza annexed, in which those Twelve Apostles are severally named. Thus translated into English :—

and succeeding it, there is another, enumerating the Twelve Apostles of Ireland. This is headed "XII. Apostoli Hiberniae," and then follow these lines, thus translated into English:

This ancient Festival, styled the Separation of the Apostles of Christ for their Missions in various parts of the old world, has been often alluded to by the early Greek and Latin Fathers. The Bollandists, who place it at the 15th of July, have a learned disquisition on its origin and history, to which the reader is referred.

Notes on the Twelve Apostles of Ireland:

Two Finnens - the two great Saint Finnians - Finnian of Clonard, 'tutor of the saints of Ireland' and Finnian of Moville.

Ciaran - Some lists include two Ciarans, both Saint Ciaran the Elder (of Saighir) and Ciaran the Younger (of Clonmacnoise).

Two Brenainns - Saints Brendan the Elder (of Birr) and Brendan the Younger (the Navigator) of Clonfert.

Son of Natfraech - Molaise of Devenish.

Finally, it may be noted that the list of the Twelve Apostles of Ireland is preserved in various manuscripts which do not always tally. Some of the saints, not present on this list, can include Saints Senan and Sinell.
Posted by Marcella at 06:30