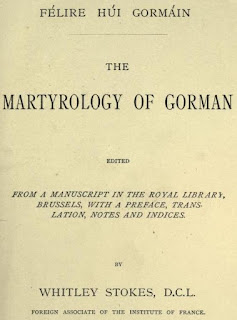 July 3 is the commemoration of a twelfth-century Augustinian abbot of the monastery of Cnoc na n-Apostol (Hill of the Apostles) in County Louth. Although this is the first post I have made in honour of his feast day, he is no stranger to the blog for Saint Mael-Muire ua Gormáin (Marianus O'Gorman) was himself a hagiologist whose lasting contribution to the study of the Irish saints is his calendar, known as the Martyrology of Gorman. His name appears quite simply on July 3 in the Martyrology of Donegal as 'MAELMUIRE UA GORMAIN, Abbot of Lughmhagh.' Below is an account of the man and his monastery from the nineteenth-century scholar, Whitley Stokes, who edited and translated Saint Mael-Muire's metrical calendar from a manuscript copy in the Royal Library, Brussels:

The Author of the Martyrology, and the Place in which it was composed.


The author of the Martyrology now published was Mael-Maire hua Gormain, otherwise called Marianus Gorman, abbot of Cnoc na n-Apstol ' the Hill of the Apostles,' a monastery of Canons Regular of St. Augustine at Knock close to the town of Louth. All that is really known of him is derived from the preface to his Martyrology, which uses the first person (rodherbsamar fuaramar, tuccsamar) when referring to the author,and may well have been written by Gorman himself, though Colgan ascribes it to an ancient scholiast.

Hence it appears that Gorman was abbot of Cnoc na n-Apstol (otherwise called Cnoc na Sengán, ' the Hill of the Pismires '), and that he composed his Martyrology while Ruaidre hua Conchobair was King of Ireland, while Gelasius or Gilla mac Liac was archbishop of Armagh, and while Aed hua Cáillaidhi was bishop of Oriel, i.e., the present counties of Louth, Armagh, and Monaghan. Ruaidre began to reign as monarch of Ireland about the year 1166 and retired in 1183 to the monastery of Cong, where he died in 1199. Gilla mac Liac was archbishop of Armagh from 1137 to 1173, when he died. Aed hua Cáillaidhi was bishop of Oriel from 1139 to 1182. The result is, if the statements in the preface are true, that Gorman must have composed his Martyrology at some time between 1166 and 1174, 'circa annum 1167,' says Colgan.

It must, however, be admitted that the Martyrology commemorates two saints—Gilla mac Liacc at March 27, and Gilla mo Chaidbeo at March 31, of whom the former died in 1 173, the latter in 1174. We are therefore driven to one of two hypotheses—either the statements in the preface are not true, and the Martyrology was composed after 1174, or the commemorations just mentioned were added after the completion of the poem. The latter hypothesis seems the more probable. The tradition of the Irish literati agrees with the preface, and the commemorations in question are at the ends of the stanzas in which they respectively occur, and may well have been inserted in accordance with the suggestion in the preface: 'If defects are found therein, let the erudite . . . add; but let them not spoil the course of the poem.' Who made these insertions does not appear. In 1181, according to the Four Masters, Maelmuire Hua Dunain, Abbot of Cnoc na Sengán in Louth, died. Of him Colgan, Acta Sanctorum Hiberniae, p. 737, says :

' Hic videtur esse B. Marianus Gormanus, author Martyrologii, a nobis laudatus, quem constat anno 1172 fuisse eiusdem monasterii Abbatem, ut praefatio eius Martyrologio prefixa, tradit' If Colgan's conjecture be right—and Lanigan agrees with him—the insertions may have been made by Gorman himself But I know of no sure instance of an Irishman being called at one time after his paternal, at another after his maternal, grandfather.

Gorman is commemorated in the Martyrology of Donegal at July 3. He was probably canonised, not by the Apostolic See, but by his metropolitan, the archbishop of Armagh, just as in 1153, St. Gaultier, Abbot of Pontoise, was canonised by the archbishop of Rouen.

The monastery of Cnoc na nApstol, or Cnoc na Sengán, in which Gorman probably wrote, was founded by Donnchad húa Cerbaill, King of Airgeill (Oriel), in honour of SS. Paul and Peter. The best evidence of these statements is an Irish entry, dated Jan. I, 1170, in an antiphonary formerly belonging to the cathedral church of Armagh, but now in the library of Trinity College, Dublin, Class B, Tab. I. No. i. This entry is printed in Petrie's work on the Round Towers, p. 391, with the following translation :

Kalend. Januar. V. feria bin. X. Anno Domini MCLXX. A prayer for Donnchadh O'Carrol, supreme King of Airgiall, by whom were made the book of Cnoc na nApstal at Louth and the chief books of the order of the year, and the chief books of the Mass. It was this great king who founded the entire monastery both [as to] stone and wood, and gave territory and land to it, for the prosperity of his soul in honour of [SS.] Paul and Peter. By him the church throughout the land of Oirghiall was reformed, and a regular bishopric was made, and the church was placed under the jurisdiction of the bishop. In his time tithes were received, and the marriage [ceremony] was assented to, and churches were founded, and temples and cloictheachs were made, and monasteries of monks and canons and nuns were re-edified, and nemheds were made. These are especially the works which he performed for the prosperity [of his soul] and reign, in the land of Airghiall, namely, the monastery of monks on the bank of the Boyne [both as to] stone and wooden furniture and book, and territory and land, in which [monastery] there are one hundred monks and three hundred conventuals, and the monastery of canons of Termann Feichin and the monastery of nuns, and the great church of Termann Feichin, and the church of Lepadh Feichin and the church of * * *.

So the Four Masters at the year 1148: ' The church of Cnoc na Sengán was finished by the bishop Ua Caellaidhe and Donnchadh ua Cearbhaill, and was consecrated by Ua Morgair, a successor of Patrick; and a neimeadh, i.e., ecclesiastical land, was assigned to it in Lughmadh....

Email ThisBlogThis!Share to TwitterShare to FacebookShare to Pinterest
Labels: Irish saints, Saints of Louth, Saints of the Twelfth Century