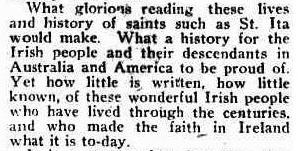 Yesterday I was reflecting on the use of Irish saints as a vehicle to promote a sense of national pride and dignity among Irish immigrant communities. I continue this theme today, the feast of Saint Ita of Kileedy, with another newspaper article aimed at Irish expatriates, this time from the Australian press of the 1920s.  The female writer begins by summarizing the career of Saint Ita but then goes on to make a plea for the heritage she represents to be better-known and for Irish writers to step up and embrace the task. Now there was hardly a dearth of publications on the Irish saints available at home and abroad during the nineteenth century, so I am a little surprised by this. Australia claimed Cardinal Moran as Archbishop of Sydney and he wrote pamphlets on Irish saints for the Australian Catholic Truth Society as well as serious, scholarly volumes on the early Irish Church. Yet I have noticed myself that there appears to be a tailing-off of interest in the Irish saints once the high-point of the Victorian 'Celtic Revival' has passed and Irish independence has been achieved. I therefore won't quibble too much with this lady's perceptions from 1925 and am delighted that on the other side of the world she didn't forget Saint Ita:
ST. ITA.
Second St. Bridget of Ireland.
(By Helene Cleary, 320 Brunswick Street, Fitzroy, Vic.).
This wonderful Irish saint was born at Nandesi, in the County of Waterford, and died as early as January 15, 569. She was of royal birth, but earthly royalty counted as naught to her— she left her worldly life, and lived an austere and retired life, in a small habitation at the foot of a mountain called Luach, in Limerick. Here she founded a monastery which became famous. The order she installed and founded was called Cluain-cred-hail. She consecrated her virginity to God, and mortified herself in every possible way. By these acts of love, and her constant attention to God and His divine love, she was gifted with numerous graces. She always impressed upon her followers that the greatest aid to perfection was to be perpetually recollected in God. Her feast was at one time solemnised in the church founded by her at Cluain-cred-hail, in all the territory of Hua-Conail, and at Rosmide, in her native territory, at Nandesi, in County Waterford.
"What glorious reading these lives and history of Saints such as St. Ita would make, a history for the Irish people and their descendants in Australia and America to-be proud of. Yet how little is written, how little known, of these wonderful Irish people who have lived through the centuries, and who made the faith in Ireland what it is today.
It is a strange fact, but true, that while Ireland is deluged with writings foreign to her thought and her ideals, she has not striven to keep pace; by blazoning before the world a wonderful wealth of literature founded upon the glories of her saints and of her ruins. We have some, yea; but what country possesses the vast wealth of material that Ireland has?
Look at the brilliant writers that Oxford and Cambridge have given to the English-speaking world. What wonderful leaders of thought and action. Catholicism in England owes its existence to men like Newman, Chesterton, Manning, and many others too numerous to mention. The Church owes them a great debt.
Irishmen are naturally gifted as writers. Why do they not write and give to the world some of this sainted past?  A brother of the Most Rev. Dr. Phelan (Rev. Michael Phelan, S.J.) says:—"Every child should be made acquainted with the life of the leading saint, and history of the most memorable ruin, in the locality. Those hoary prophets, now so mute, would then speak with tongues of fire out of the dim past, telling the story of our fathers' faith and heroic achievements."

I know several Ita's. Yes - her plea is a little surprising.