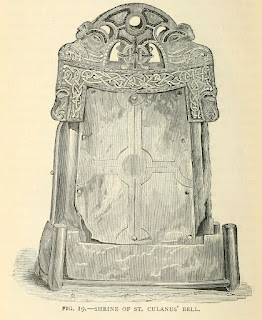 February 18 may be one of the feast days of a County Tipperary saint, Cúlán of Killcuilawn. Saint Cúlán is associated with a relic, the Barnane Cuilawn, about which I will make a separate post at a later date. It does not seem to be entirely clear how this Saint Cúlán is related to another of the same name commemorated on 12 March. Indeed overall, Canon O'Hanlon is unable to fully dispel the confusion surrounding this saint's identity and feast day. Professor Ó Riain's Dictionary of Irish Saints lists the saint at February 18 and gives literary sources for his cult. He confirms that Saint Cúlán's feast is not recorded in any of our native calendars, but is found in a copy of the Martyrology of Usuard made in Cologne just before the year 1500:

[Possibly in the Seventh Century.]

At this date, Colgan has a few notices, regarding St. Culanus or Dacualenus, a bishop. He thinks, however, that the name of this holy man should be written Cuculanus. In the anonymous list of Irish saints, published by O'Sullevan Beare, as also in the Catalogue of Henry Fitzsimon, at this day, we have a St. Cuculanus. On the authority of Florarius, the latter writer styles him bishop.The Bollandists have short Acts of this Saint Culan, in their great compilation. Yet, what Godefrid Henschenn adds there, to Colgan's remarks, are not worthy of much consideration. Many foreign writers, amongst others Ferrarius,and Canisius, make mention of St. Culanus, as having been venerated in Ireland, on this day. By Florarius, he is called Cuculanus. But, Colgan tells us, he was unable to discover a saint, bearing either name, and whose festival had been kept on the 18th of February, according to our domestic Hagiographers. Yet, Usuard auctus, or the Carthusian Martyrology, and Hermann Greuan, have accounts of St. Culan, Bishop and Confessor, as having been venerated in Ireland, on this day. In one instance, Colgan has classed St. Culenus or Culan, Bishop, among the disciples of St. Patrick, following Tirechan's list. We know, that in the Irish Calendars, there are many saints, having the name Colan or Coelon. However, Culanus, Cuilen, or Cualen, was the same as Culen or Dachualen, whose commemoration occurs, at the 12th of March, in the Martyrologies of Marianus O'Gorman and of Cathald Maguire. If he be the same person, his descent is traced, in the Genealogy of the Saints of Ireland, by Cormac, Bishop of Cashel, from the Hy-Niall family. The father of this saint was Guaire, son to Columba, son to Crimthann, son of Eochad Binnigh, son to Eugene, son to Niall of the Nine Hostages. Notwithstanding his assertion, Colgan omits any mention of a saint, bearing this name, at the 12th of March. According to the foregoing pedigree, this holy man should naturally belong to about the beginning of the seventh century. In the parish of Borrisoleigh, also called Illeagh, in the county of Tipperary, there was formerly a church dedicated to a St. Coulane—identical with the present saint—and here was long preserved a singularly ancient and curiously wrought bronze shrine or bell, called the "Barnane Cuilawn," which was formerly in the possession of the Dwyer family, living at Ballinaruan, near Borrisoleigh, and afterwards it became the property of the late Thomas L. Cooke of Birr, who got it from the Dwyers. It passed from Mr. Cooke to a public institution, and it is said, that the "Barnaan Cuilawn" was found many years since, in the hollow of a tree, at a place named Killcuilawn, situate in the mountains, and about two miles distant from Borrisoleigh, in the parish of Glankeen and county of Tipperary. This curious relic, of a remote age, is likewise called in the Irish language "Obair na naoim;"—that is "the Saint's work." ...

...It is likely, St. Culan had his habitation, not far removed from Borrisoleigh, and Killcuilawn derived its name from a church he had there founded. His period is not well known, for, the accuracy of that information, furnished to the compilers of a modern topographical work,hardly falls within the range of probability. It is more likely he belonged to the seventh century. At Glankeen, it is said, an abbey had been founded, so early as the time of St. Patrick. In a Life of St. Cormach, it is stated, that he was descended from Oilum Olum. It relates, that he had five brothers, by the same father, and that Culanus was one of these. Again, it is asserted, that this St. Culan built a church in a valley of the region, known as Hi Luigdlicach, where he remained among his kindred and acquaintances. His pedigree is thus traced; he was the son of Eugene, son to Murchad, son of Muredac, son to Diermit, son of Eugene, son to Alild Flanbeg, son of Fianch Muillethain, son to Eugene the Great, son of Ailild Olum. His church was called Glean-chaoin, "the beautiful glen," and it lies at the foot of Knockanura mountain, and at the bounds of Killaloe See. In reality, two buildings raised at different periods present themselves in the ruins of Glean-choin or Gleankeen Church. There was an old building formerly at Killcuilawn; but, towards the close of the last century, its stones were removed for the purpose of building a house. The Church of Culan was benefited by the piety and generosity of his relatives, and these considered themselves as more than recompensed by the saint's prayers for their welfare. What particular reason there was for supposing, that Irish Apostolic men brought the relics of St. Culan to Germany, or even a veneration for him, Godefrid Henschenn has not explained. From what we have already seen, his relics appear always to have remained in Ireland; and probably, he belonged to that part of it, where the "Barnane Cuilawn" had been so long preserved.