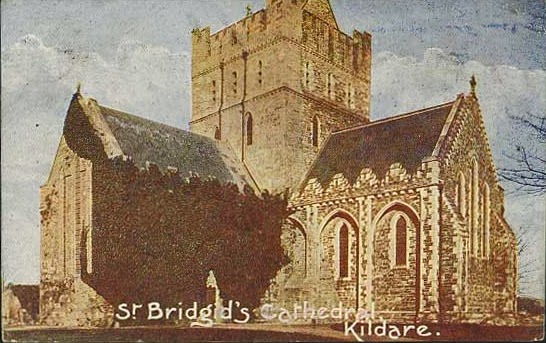 February 1 on the Irish calendars, old and new, has always been predominantly associated with the feast of our national patroness, Saint Brigid of Kildare. Perhaps less well-known is the other abbess of Kildare with whom she shares her feast day. I found as I was reading Canon O'Hanlon's account of Saint Derlugdacha below, that there were many aspects of this saint's life and cult that I would like to research further. I was aware that there was a devotion to both of these holy abbesses in Scotland, but Canon O'Hanlon mentions that the Scottish hagiologist Thomas Dempster (1579-1625) also attempted to associate her with a family of 'Scottish' saints who went to Germany. Dempster caused great annoyance in Ireland by ignoring the reality that in the early middle ages Ireland was frequently described as 'Scotia' and its inhabitants 'Scotti', and then proceeding to claim Irish saints for his own country. I agree with O'Hanlon's analysis that although the existence of a cult of the saint in Germany seems to be proven, it does not follow that the saint herself ever set foot in Germany. It would therefore be interesting to know by what means devotion to this Irish saint was brought to Bavaria. The hagiography of Saint Brigid depicts a very close relationship between Kildare's founder and her successor to the extent that Derlugdacha asks to leave this world at the same time. This wish is granted but only one year after Saint Brigid's death. Interestingly, exactly the same motif is present in the hagiography of our tertiary patron, Saint Colum Cille, who shares his June 9th feast day with his kinsman and successor Baithin, who followed him from this world on the same day a year later. I hope to post again in the future on Saint Derlugdacha as I would be interested in researching her cult in Scotland and Bavaria. I have made a preliminary post on her connection with Abernethy in Scotland on my other site here,  but for now Canon O'Hanlon gives us an overview of this interesting saint from Volume II of his Lives of the Irish Saints:

Because of her fortitude and fidelity, Derlugdacha was specially called St. Brigid's alumna, or foster-child, and on account of efforts made to emulate the virtues of her holy superioress. Among all other religious daughters, under the Abbess of Kildare, a particular affection seems to have been entertained for her alumna. This regard was cordially returned by our saint. Such was Derlugdacha's remarkable and fervent love towards God, and devotedness towards her superioress, that she desired to depart from this world, on that day, when St. Brigid was about to be called to her everlasting reward. For, when this holy servant of Christ had been pressed down with the weight of advancing years, Brigid's favourite foster-child one day said to her superioress: "My mother and mistress, I desire to go with you instantly to God's kingdom." To which the saintly and venerable mother abbess replied : " It shall not so happen, but you shall succeed me as abbess for one year, and when it will have expired, you shall die on the anniversary day of my departure, and the same date must commemorate my festival and thine." This prophecy was duly fulfilled. Thus, united in life and love with the venerable Brigid, as our saint desired to obtain a closer union with her superioress, at the death and final triumph of the latter; so, Derlugdacha obtained the object of her petition, although in a manner somewhat modified. The Almighty, who unalterably guards his own wise decrees, is yet attentive to the pious desires of his petitioners, and he becomes the rewarder of all virtues. As his spouses were engaged in the exercises and pursuit of piety, so was it meet, that they should be everlastingly and unitedly crowned. But, he wished Derlugdacha, the favourite scholar of Brigid, to survive her holy mistress, for the exact term of one year. She wept over the bier of Kildare's great abbess. God obliged our saint to exercise the office of superioress over that institution, and to become St. Brigid's immediate successor there, during a very short interval. Such duties Derlugdacha efficiently discharged, and she acquired thereby an additional degree of merit; for, when her allotted term of life had expired, she departed from this world, on the very anniversary day of St. Brigid's decease. While both saints enjoy a united society in happiness inexpressible, so are they commemorated on earth, and on the same festival day, the 1st of February. This is attested, not only by Irish, but even by foreign writers. St. Derlugdacha's memory has been preserved in benediction, we are told, not alone at Kildare in Ireland,  but even at Frisingan and in Scotland. Her death has been assigned to A.D. 524, by Colgan, as he places St. Brigid's departure at the year immediately preceding, A.D. 523. Dr. Lanigan observes, that Derlugdacha died in the year 524 or 526, according as the death of St. Brigid may be computed, while he allows her festival to have been undoubtedly on the 1st of February. The Rev. Thomas Innes and Bishop Forbes have notices of her at this date. The Irish and Scottish Kalendars commemorate St. Derlughdacha, or Derlugtach. Her mere name, Derlugach, is noticed in the Martyrology of Tallagh, at the 1st of February. In the anonymous Calendar of Irish Saints published by O'Sullivan Beare, at this day, Derludaha is entered. In the Martyrology of Donegal, on this day, we read that Derlughach, Abbess of Cill Dara, and the next in succession after Brighit, was venerated. Another feast of this same virgin Darlugtach was celebrated in Scotland on the 1st of October. In pursuing a course of penitence, let the sinner after conversion become a follower of Christ by virtuous deeds, as hitherto evil promptings had urged the following of Satan by inclining to sin. When the clouds are darkest they often only foretoken a change, which covers the earth in a livery of the very whitest snow. Notwithstanding, the sinner's lapse into crimes, yet may he rest assured, that God will pardon those very offences, of which he has truly repented. Living a holy life and dying a holy death, subsequently, a merciful Lord adopts the prodigal, and restores him to favour.