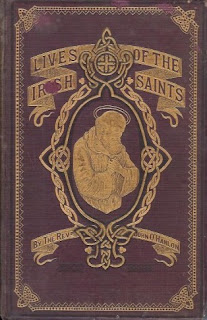 September 23 is the feast of one of the most learned and gifted saints Ireland ever produced, Adamnan of Iona. He shares his feastday on the Irish calendars with two lesser-known male saints, one of whom is a Saint Connich or Conaing Mic Luachain. As Canon O'Hanlon's entry for this saint will make clear, his precise identity has not been established. The earliest of the calendars, the Martyrology of Tallaght, simply gives the name Connich and adds the patronymic 'mic Luachain', son of Luachan, without any further specifics. The great 17th-century hagiologist, Father John Colgan, suggested that our saint may be the same individual as a Saint Conaing who features in the hagiography of Saint Mochoemoc. It was also suggested that he may have been a saint of this name who is mentioned in the Life of Saint Molagga. Canon O'Hanlon himself plumps for the notion that he is the Conaing Ua Daint, successor to Saint Ailbhe of Emly, whose death is recorded in various Irish annals between 657 and 660. None of these sources, however, seem to include the use of the saint's distinguishing patronymic, and although Canon O'Hanlon does not come out and say so, it seems that we cannot identify the Connich or Conaing commemorated on September 23 with any certainty:

The manuscript and published Martyrologies of Tallagh register a festival, at the 23rd of September, in honour of Connich, son of Luachain. He is also entered at this date in the Martyrology of Marianus O'Gorman, whose commentator calls him Mac Lucunain, or the Son of Lucunain. In Colgan's opinion, the present holy man appears to be identical with a certain Conagius, who is mentioned in the Acts of St. Mochoemoc, Abbot of Liathmor. He is also thought to have been the Conangius O'Daithil, who is mentioned in the Life of St. Molagga. At the year 660, we meet the death of Conaing Ua Daint, Abbot of Imleach Ibhair, or Emly, recorded. The Irish accords with the foregoing spelling of the name. St. Alveus was first Abbot and Bishop of Emly, as would appear from his Life. The successor of St. Alveus, the present Conangius, appears to be the Saint bearing such name, whose Natalis was observed on the 23rd of September, and who is called son to Luachan, by the Martyrology of Tallagh, by Marianus O'Gorman, and by the commentator on St. Aengus. There was a chapelry of a St. Cunning, in the parish of Carncastle, County of Antrim, supposed to have been Tulach or Killchonadhain, mentioned in the Tripartite Life of St. Patrick. The present Saint's festival is found in the Martyrology of Donegal, at this day.