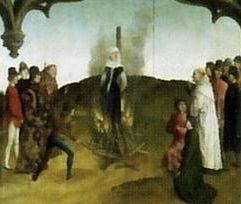 Among the saints listed for September 18, Canon O'Hanlon includes an entry for a European Empress, Richardis of Swabia. Hers is a rather startling story, the wife of Emperor Charles the Fat, she was accused of adultery with her husband's chancellor and subjected to the trial of ordeal by fire. Needless to say, she survived and retired to a monastery. It seems that there was some tradition of her having been born in Scotia and thus some of the later hagiologists claim her for Ireland. In the early middle ages it was common for Ireland to be known in Latin as Scotia and only later for the term to be applied to what we now know as Scotland.  Canon O'Hanlon rarely has any difficulty in going along with the claims of sixteenth/seventeenth-century hagiologists that the offspring of alleged 'Scottish' kings can be listed among the Irish saints, although whether there actually was any link to this country is another question.

Feast of St. Richarde or Richardis, Empress and Virgin.

This saintly and noble lady is referred to, at the 18th of September, by Platius, Henry Fitzsimon, and the anonymous list of Irish Saints, published by O'Sullivan Beare, a have her classed among the Irish Saints. The Bollandists have inserted such accounts as could be collected regarding this holy woman, at this date, in a historic sylloge. They tell us, that by some recent writers, St. Richardis is said to have been born in Scotia, and to have been the daughter of a Scottish king. However, this account has been rejected and refuted by Matthew Rader. Other writers think she was born in Alsace, and that she was daughter to the Count Erchangier, of Nordgau. She was renowned for her virtues, and married the Emperor Charles le Gros. With him she was crowned and consecrated, A.D. 881, by the Sovereign Pontiff John VIII. Notwithstanding that she lived with her husband in a state of virginity, she was accused of incontinency; but, by a public trial her innocence was fully proved. With consent of the Emperor she quitted the Court and retired to Andlau on the Lower Rhine, where they had founded and endowed a monastery. There she lived for many years. After death various miracles attested her sanctity. When Pope St. Leo IX. passed through Alsace A.D. 1049, he had the body of St. Richardis raised and placed in a grand monument behind the high altar. The parish church of Etival, in the diocese of St. Die, still preserves some relics of St. Richardis, but the rich shrine which once contained them perished during the excesses of the French Revolution. It seems to have been Colgan's desire to publish her Acts, at this same date, as we find Richardis Imperatricis mentioned on the posthumous list of his MSS.