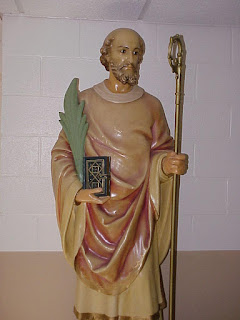 November 9 is the commemoration of a member of Saint Patrick's household, Benén (Latinized Benignus), the psalm-singer. The Martyrology of Marianus O'Gorman refers to 'bright Benignus a dear scion' on this day, but he has a fuller entry in the Martyrology of Donegal which Archbishop John Healy quotes below. This extract on Saint Benen has been taken from his 1905 book The Life and Writings of Saint Patrick. The Archbishop was writing in the days when the traditional Armagh account of Saint Patrick as the apostle of the whole country was accepted unquestioningly. Yet his account of Benen is still interesting, especially since the author sees Benen as much more than a mere church musician:

We have already spoken much of Benignus. It is probable he belonged to a bardic family, and in this way had an hereditary gift of music and of song. The Gaels have been always passionately fond of music, and the bards were always a privileged class amongst them, with hereditary estates, and in earlier times an acknowledged right to make an official circuit of all the great houses of the country, where they received rich gifts and abounding hospitality.

No doubt St. Patrick was well aware of the attractive influence which the music of the Church would naturally exert over such a people. So he gave Benen charge of his church choirs, with the duty of training his young ecclesiastics in the psalmody of the Church. Moreover, Patrick himself, who had dwelt so long in the greatest monasteries of Gaul and Italy, would be well acquainted with the grave and noble psalmody of the Church, as it existed at that time, and we may fairly assume that Benignus taught the same solemn chants to his own church choirs. That he had a sweet and musical voice is shown from the incident recorded of Daire's daughter, who was melted into love 'by the voice of his chaunting.' And his sweet strains of heavenly melody must have had a softening influence on the wild warriors who gathered round him, and were, as we know, extremely susceptible to the manifold influences of music and song.

But Benignus was something more than Patrick's psalm-singer. He was a member, probably the secretary, of the great Commission of Nine, who were intrusted with the purification of the Brehon Laws. In that work he may be regarded as the representative of St. Patrick himself, whose manifold duties would render it impossible for him to give personal attention to minute details. Then, again, Benignus had of course a far better knowledge of the language, and a much wider acquaintance with the institutions of his native country than Patrick could possess, and so we may be sure that he took a leading part in successfully accomplishing the revision and purification of the Brehon Code.

The original composition of the Book of Rights is also attributed to St Benignus. He composed it in poetry, of rather he wrote out in enduring form the bardic poems which defined the rights and duties of the kings and chiefs throughout all the land of Erin. Those poems also, in some things, doubtless, needed revision to make them harmonise with the new Christian polity introduced by St. Patrick, and Benen would be naturally the person best qualified to accomplish the work. The very title of the book attributes it to Benignus. 'The Beginning of the Book of Rights (Ledbhar Na g-Ceart), which relates to the revenues and subsidies of Ireland, as ordered by Benen, son of Sescnen, Psalmist of Patrick, as is related in the Book of Glendaloch'. Such was the original title. This work was afterwards enlarged and corrected, as we now say, up to date, by Cormac Mac Cullinan, and at a later period by McLiag, the secretary of the renowned Brian Boru. But all these authorities themselves admit that the original work was completed by Benen, though, no doubt, with the aid of the Bards and Brehons around him at the time.

Benen was also a great missionary bishop, although we cannot now admit that he was the founder of Kilbannon, near Tuam, or of the beautiful little church that bears his name in Aranmore. But most likely it was he that Patrick left for some time at Drumlease, to watch over that infant church, which at the time Patrick designed to make his own primatial See. But providence had ordained otherwise, and Benen as well as Patrick had to leave that smiling valley at the head of Loch Gill far behind them for the colder coasts of the stormy North. Benen was greatly devoted to his beloved master, and, so far as we can judge, he never sought a church of his own, but always remained in Patrick s family. When Sen Patrick died about the year A.D, 457 St. Patrick chose Benignus to be his coadjutor and destined successor; and thenceforward we may assume that he dwelt chiefly at Armagh, The duration of his episcopacy in Armagh, as Patrick's destined successor, is set down as ten years in the Irish list of the Book of Leinster. So the date of his death given in the Annals of Ulster as A.D. 467 is correct, but as they date from the Incarnation, the year from the Nativity would be 468, which appears to be the exact year.

The Martyrology of Donegal, in recording his death at Nov. 9th, says of him : —

BENIGNUS, i.e., Benen, son of Sescnen, disciple of Patrick, and his successor, that is, Primate of Ard-Macha. He was of the race of Cian, son of Oilioll Olum. Sodelbh, daughter of Cathaoir, son of Feidhlimidh Firurghlais, of Leinster, was his mother. The holy Benen was benign, was devout ; he was a virgin without ever defiling his virginity; for when he was psalm-singer at Ard-Macha along with his master, St. Patrick, Earcnat, daughter of Daire, loved him, and she was seized with a disease, so that she died suddenly; and Benen brought consecrated water to her from Patrick, and he shook it upon her, and she arose alive and well, and she loved him spiritually afterwards, and she subsequently went to Patrick and confessed all her sins to him, and she offered her virginity afterwards to God, so that she went to heaven ; and the name of God, of Patrick, and of Benen, was magnified through it.

It is a very touching and romantic story, which has caught the fancy of our poets and chroniclers, and. as the scribe in the Martyrology declares, gave glory to Patrick and to Benen after God: but none the less is the holy maiden's name glorified also, whose young heart was touched by human love, which, in the spirit of God, was purified and elevated to the highest sphere of sinless spiritual love in Christ. It has often happened since.

As I read more of the modern scholarly analyses of Saint Patrick, I come to appreciate why one might secretly yearn for the certainties of the days of Archbishop Healy. As a contrast to Healy's view of Saint Benen, I offer some thoughts from current Patrician scholar, David Dumville, from his most interesting and useful volume of studies Saint Patrick, A.D. 493-1993. In one chapter he examines some of the characters associated with Saint Patrick, noting that they all have non-Irish names - Auxilius, Iserninus, Secundinus and Benignus. Whilst Archbishop Healy would have accepted at face value that these men were all loyal lieutenants of Patrick, the all-conquering national apostle, revisionist scholarship sees them as members of the entourage of Palladius. Dumville raises the possiblity indeed, that they are purely an invention of seventh-century and later hagiographers, who enjoyed a classical joke. Thus he says:


The joke - rather in the manner of Vergilius Maro Grammaticus, one might think - that Auxilius was Patrick's helper, Secundinus his second in command, Iserninus the hard man of the mission, and Benignus its kindly face...

As for Benignus, while he is a figure of hagiography,


...he does make appearances in other contexts - in the chronicles, in Liber Angeli, and in Patrick's company or as his representative in a variety of other situations, legal and pseudohistorical. Benignus, who is found first in the work of Muirchú and Tirechán, is always presented as Patrick's heir or successor; in Tirechán's Collactanea he is described also as a bishop. His associations, therefore, are with Armagh, but the Additamenta in the 'Book of Armagh' have him living seventeen years at a church i nDruimm Daro .i. Druim Lias, Drumlease in Co. Leitrim. Irish origin is attributed to him - he is made to come from the area of hostium Ailbine, 'the estuary of [the River] Ailbine', identified as the River Delvin (Co. Dublin/Meath) - but without a great deal of accompanying detail.

In Irish Benignus normally appears as Benén. In Latin, the word was at once an adjective ('kindly', etc.) and a name which derived from it. The name was well known, but perhaps less widely used in Late Antiquity and the early middle ages than one might have expected. As to its persistence, a Benignus, is recorded as being bishop of Angers in the first half of the eighth century...

Dumville goes on to pursue a technical discussion of the name and its variants known in Ireland before concluding:


Benignus may be a hagiographical fiction: if so, however, the Latin and Irish names have adhered firmly to him from the first. At the other extreme, he might have been a British or Continental cleric who did indeed bear that Latin name, a member of staff of one of the early bishops (even perhaps as a boy, as he is presented in the hagiography). If so, then he acquired (like some other foreign clerics) a native Irish identity by the late seventh century. A third possibility is that the core of what the earliest hagiographers asserted about him is correct: that he was an Irish convert, perhaps as a boy, who was one of the early native bishops. Parallels are available from seventh-century England, although in that context the names chosen seem to have been more overtly Christian (like Deusdedit) or else biblical. That Benignus was bishop of Armagh, let alone Patrick's successor there, is an altogether more uncertain proposition for which no controlling testimony is readily available.