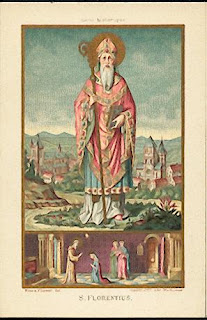 November 7 is the commemoration of Saint Florentius (Florence), an Irishman who laboured in Strassburg, sometime in the sixth century. Below is an account of his life from Roísín Ní Mheara's study of early Irish saints in Europe. I note among the many points of interest that his church had an altar dedicated to Saint Brigid, and that like Saint Brigid, Florentius is also said to have hung his cloak on a sunbeam!

Strassburg, not seated directly on the Rhine, used the waterways of the Ill for river barges trading with the city. Here, outside the walls, near the Ill landing place stood the monastic school of St Thomas, another early Christian foundation with strong Irish connections. Two Irish bishops of sixth century Strassburg, associated probably with Trier, have left their mark here on the present day Protestant church of St Thomas. With an attached institute of learning, including a seminary of theology, it pays tribute to a spiritual heritage when St Thomas was called the 'cradle of Alsatian Christianity'. Bishop Florentius, claimed to be of Irish birth and nobility by his biographers, founded the monastery, choosing the peripheral site with intent. The conversion of country folk being his main concern, he encouraged pilgrimages to the grave of his predecessor and countryman Arbogast, entombed in St Thomas. This place, associated in tradition with early Christian baptisms, had also an altar dedicated to St Brigid.

St Thomas, with its austere medieval tower, is next to Strassburg cathedral, the town's most significant church edifice. Its interior reveals features of many historical epochs. At the Romanesque entrance to the chapel of St Blasius is a wall painting in which we are shown St Florentius in the symbolic gesture of restoring a lamb, stolen by a wolf, to its rightful owner. This popular legend is now attached to the cult of the later St Blasius, also a professed tamer of animals. Plagiarism is something early saints have to put up with!

Who are Arbogast and Florentius? The scarcity of sixth century documentation clouds the path of pioneer days when those missionaries entered Alsace, starting, we are told, with hermitages, to be consequently called to the see of Strassburg by Merovingian kings. The impression received points to the category of learned Irishmen who were drawn, first to the cultural centres of southern Gaul, becoming then infused into Trier for reformatory and apostolic reasons....

The fame of Florentius, whose bishopric is not dated, but succeeded that of Arbogast, is due to his two important monastic foundations - St Thomas in the periphery of Strassburg, and that of Niederhaslach in a valley to the west of the city. There, where the Hasel streamlet descends the wooden slopes of the Vosges to meet the Bruche (Breusch) river, Florentius erected his first monastery with the help of his Irish companions. Excavations have revealed that his church, built on a Roman site, was no mean wooden structure but a stone edifice with three naves in the Byzantine style. Here his followers, it is explicitly stated, obeyed the Rule he laid down for them, adhering later to that of St Columban before adopting that of St Benedict.

Louis the Pious, son of Charlemagne, caused a new church to be built over the Haslach foundation to receive the remains of the holy bishop Florentius who was first buried in St Thomas in Strassburg where he died. The translatio took place on 7November 810 and was pronounced a feastday to be celebrated by the entire diocese, and so it has remained.

This is the Florentiusfest, held yearly on the Sunday following 7 November when the shrine and a life-size wooden statue of the patron saint are borne in procession around the village of Niederhaslach. Later in the day pilgrims visit Oberhaslach where they pray in the Chapelle Saint-Florent.

Halsach, whether Ober (Upper)or Nieder (lower), are modest enough villages to harbour so majestic a church, but the bishops of Strassburg had once their summer residence here and the place was not divided... The west facade with its slender Gothic portal bearing the legend of St Florentius carved on its tympanum, is the work of a son of Erwin von Steinbach, the builder of Strassburg's fabulous cathedral. He is buried inside the church, having fallen to his death from a scaffold during its erection. Near his tomb we encounter again the story of Florentius, as a worker of miracles, in one of the stained glass windows... The altar of St Brigid is gone, but Florentius' relics are is a niche in the choir, his gilded shrine of 1716 replacing a priceless relic that was robbed in 1525, when the saint's remains were thrown on the church floor. Taken to safety, restored to the church, then hidden again in various private houses, they were eventually brought back to rest after the French Revolution subsided.

Beside these depredations, the worldy remains of Florentius had other ordeals to overcome, being for centuries the object of fierce controversy between Strassburg and Haslach, both proclaiming to be in possession of them. This endless 'War of the Relics' obliged the German emperor Karl IV to intervene in the year 1353 in person. He caused the contents of both reliquaries to be examined, after which, to the joy of Haslach's Augustinians, the affair was settled in their favour. Gratified, they presented the monarch wih an arm of the holy patron, which he took with him to his residence in Prague. A special altar was provided for the Florentius relic in the cathedral and there it has, hopefully, remained.

Florentius had started off with a cenobium in the wooded Haslach valley, near the present village of Oberhaslach. Several place-names in the vicinity bear out the tradition of this eremitic community, a site to the northeast of the village. References are given in Strassburg's early diocesan files to 'priests' quarters, described as 'zu den Schotten' and 'de Scotti' (of the Irish). Considering that these sites were wiped out in the wars, the reference is most welcome and revealing. The pilgrims' church of Oberhaslach does its part in keeping alive the Florentius tradition.

There an old Roman road leading off in a north-easterly direction to Marlenheim is also indicative. Marlenheim was once the seat of Merovingian royalty, who donated land to Florentius for a missionary station. The proximity of the palace brings to mind the healing of King Dagobert's daughter, a miracle performed by Florentius, portrayed both in stone and in painted glass in Niederhaslach's noble church. The legend records how the saint on arrival hung up his cloak on a sunbeam.