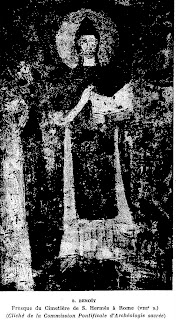 Although there are a number of Irish saints commemorated on July 11, I found myself interested in the noting on some of our native calendars of the feast of the Translation of the Relics of Saint Benedict. Although the major feast of the father of western monasticism fell on the day of his natalis, March 21, at which date it was recorded in the Martyrology of Aengus, the Martyrology also commemorated the second feastday of Saint Benedict, that of the translation of his relics, on July 11. I was struck by how Saint Aengus the Martyrologist brings together the saints of the East, the West and of Ireland on this day, for the entry sandwiches 'Benedict, a strong pillar' between the names of the Great Martyr Euphemia and a local saint, Failbe, from Dísert maic Con-lócha in County Westmeath:

11. With the martyrdom of the queen,
Euphemia the hostful,
Benedict, a strong pillar,
Cu-lógae's devout son.

The later Martyrology of Marianus O'Gorman, written in the 12th century, spells out the title of the feastday:

11. C.
The translation of the body of the cleric
Benedict whom thou proclaims.

Canon O'Hanlon has a short paragraph in Volume 7 of The Lives of the Irish Saints too:

In the "Leabhar Breac" copy of the "Feilire," by St. Aengus, there is a record of St. Benedict's festival, at the 11th of July. Furthermore, a scholion informs us, that he was Benedict, the Father of Monks. Usuard and other ancient Martyrologists have it as the festival for a Translation of his relics, as the Bollandists note at this day. They refer, however, to his chief feast, at the 21st of March for an exhaustive illustration of his Acts. Also, in Usuard is to be found, at this same date, a Translation of the relics of his sister Scholastica, whose chief festival and Acts are noticed, on the 10th of February.