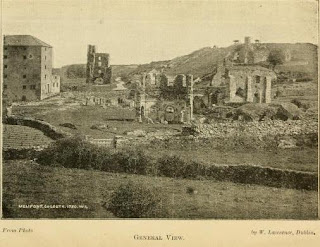 At June 28 Canon O'Hanlon has a brief notice marking the feast of a monk from the Cistercian foundation at Mellifont, County Louth. Mellifont Abbey was founded in 1142, the first Cistercian monastery to be established in Ireland. Its first abbot was said to be Saint Christian O'Connarchy, who died in 1186 and whose own feast day is March 18. Some sources say that the founder abbot was succeeded by his brother, Malchus, as the writer of an 1897 guide to the monastery explains:


About the same time [i.e. 1186], there died at Mellifont, a holy monk named Malchus, who is said to have been St. Christian's brother and successor in the abbatial office, as has been related above. Ussher, quoting St. Bernard, positively asserts that he was St. Christian's brother. And Sequin, who, in 1580, compiled a Catalogue of the Saints of the Cistercian Order, mentions Malchus in that honoured roll, and styles him "a true contemner of the world, a great lover of God, and a pattern and model of all virtues to the whole Order." He says, "he was one of St. Malachy's disciples in whose footsteps he faithfully followed, and that he was renowned for his sanctity and learning, as well as for the many miracles he wrought." His feast was kept on the 28th of June.


Canon O'Hanlon has only the briefest of notices for this holy monastic:

The Blessed Malchus, Monk of Mellifont, County of Louth.

At this date, the Bollandists have a feast for the Blessed Malchus, of the Cistercian Order in Ireland, on the authority of Henriquez and Chalemot.