Some Saints of County Clare 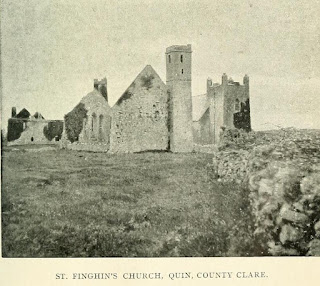 I was recently reading a paper by the one-time president of the Royal Society of Antiquaries of Ireland, T.J. Westropp (1860-1922). His subject was the Churches of County Clare and it includes a useful appendix on the patrons and founders of the churches. I reproduce the list below, please note that in the references to the feasts of the saints the letter 'O' refers to the Martyrology of Oengus and 'D' to the Martyrology of Donegal. Those preceded by an asterisk are female.

The list of patrons and church builders in this county, during the period from 450 to 750, extends to over sixty names, nor can I satisfy myself that it is in any way complete. Owing to difficulties of identity and date, they are arranged alphabetically, not chronologically.

AEDAN of Iniscatha, stated to be the famous saint of Lindisfarne, August 31st.

If so, Bede records his death in 651. The Leabar Brecc identifies Inis Medcoitt with both Scattery and Lindisfarne, but the matter is very doubtful.

CAMIN of Iniscaltra, son of Dima, of the race of Cathair Mor, and half-brother of King Guaire Aidhne; churches of St. Caiman, at Iniscaltra, Moynoe, and perhaps Kilcameen, near Kilfenora, died March 25th, 653 (Colgan) (0).

*CANNARA of Kilconry, Visited St. Senan, and was buried on Iniscatha.

CARROLL, of KilCarroll, near Kilrush, where his well, ''laght," and wooden image remained in 1816.

COLMAN MACDUACH of Kilmacduach, half brother of Guaire Aidne, and (through their mother) a descendant of Dathi. Colman studied in Aran, and lived a recluse life at Kinallia, Slieve Carran, and Oughtmama; wells at Teernea, Lough George, and near Crusheen. He founded Kilmacduach about 610; his mediaeval "Life" is extant; he died at Oughtmama 29th October, 632. He gives his name to Macduach's river in Clooney Parish, near Quin.

COLMANS the three, of Oughtmama churches and well and Glensleade well.

COLUMBA of Glencolumbcille, probably the famous saint of Iona, who is the traditional founder of Crumlin, after leaving Aran, June 9th. Another tradition connects him with Iniscaltra; he died at Iona 597.

CONNELL of the lost church of Kilconnell, on the Fergus (will of King Cormac, of Cashel, 902).

CRONAN of Tomgraney, October 24th, c. 505; November 1st.  He or the second Cronan was also patron of Inchicronan and Termoncronan. The wells at Killokennedy Church and Corrakyle are dedicated to a Cronan.

CRONAN of Tomfinlough, the Leabar Brecc identifies him with Cronan of Roscrea, April 28th.

ENDA of Aran, son of Connall the red, was granted Aran by his sister's husband, Engus, King of Cashel; founder of the church of Killeany, in the Burren; March 21st, c. 480: see his " Life " in Colgan.

FACHTNAN of Kilfenora, perhaps of Ross, as the same saint's day, August 14th, was observed at both places (D).

FINGHIN of Quin, perhaps Einghin of Roscrea, February 5th (D), or Finghin of Clonmacnoise, whose coarbs were connected with Tomgraney.

FLANNAN of Killaloe, son of King Torlough; his Latin Life is preserved; he preached in the Hebrides, and gave his name to the Flannan Isles there; living c. 680, December 19th.

*ITA of Killeedy, January 15th, living 551. She is alleged to have founded a church in Southern Clare.

LAUGHTEEN of Kilnamona, chui'ch and well, and the wells at Kilfarboy and Stacpoole's Bridge, near Miltown Malbay; the reliquary of his arm was preserved at Kilnamona for some time, and thence sent to Lislachtin, Kerry. He is most probably Lachtin, friend of St. Senan, c. 550, and gave his name to Autkeenlaughteen at Kilnamona.

LUCHTIGHERN, son of Cutrito, of Tomfinlough, and perhaps of Inisdimain (Ennistymon, or Moy Inisdia). A friend of Maccreehy, c. 550, April 13th, as kept in parish in 1839. April 28th, in Calendar of Oengus.

MACCREEHY, Maccreiche, or Maccreeius, of Kilmacreehy, a disciple of Ailbe of Emly, who died 540, having lived to an advanced age, founding Kilmacreehy, Kilmanaheen, and Inagh churches, about 580. April 11th (D): his curious Latin "Life " is extant.

MAINCHIN of Kilmanaheen, a disciple of Maccreehy, c. 580. Perhaps the Bishop of "Luimneach," now known as St, Munchin, and Manchenus.

MORONOC of Inisloe, the penitentiary, a friend of S. Senan, c. 550.

ONCHU of Killonaghan, probably the son of Blathmac, whose remains were laid with those of Finan in a "Sepulchrum religionis" at Clonmacnoise.

STELLAN of Iniscaltra, a contemporary of St. Caimin, died May 4th, c. 650. Perhaps also of Terryglas. May 26th.

TOLA of Dysert Tola (Dysert O'Dea), son of Donchad, of the race of Corbmac, died March 30th, 734 or 737. He was Bishop of Clonard and Disert Tola, in the Upper Cantred of Dalcais. His crosier is preserved. He was probably founder of Kiltoola.