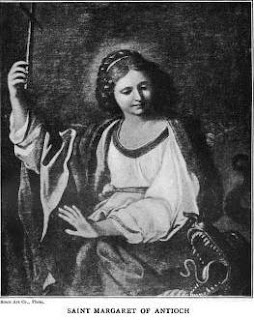 Although this site is dedicated to the saints of Ireland, I also enjoy seeing how devotion to saints of the universal Church manifests in an Irish context. July 20 is the feast of Saint Margaret of Antioch, one of the Great Martyrs of the east who, although she enjoyed a widespread cult in the west during the Middle Ages, is now largely forgotten. In the western setting she was one of the Fourteen Holy Helpers, a group of saints whose intercession was sought to aid in the difficult and dangerous realities of medieval life. The account of Margaret's martyrdom included an episode where she was swallowed by a dragon but managed to irritate the creature's insides by making the sign of the cross and was expelled from its body. Thus she came to be viewed as a saint to whom women in childbirth, an extremely hazardous time for the medieval female, could turn. Lives of Margaret survive not only in Latin but also in many medieval European languages, and in Irish alone there are reputed to be at least ninety manuscripts containing accounts of her [1].  These Irish accounts remain largely unpublished but one interesting later manuscript, taken to America by an emigrant family, has been described by the late Dr Kenneth Nilsen [2]. He was invited to view the Irish Collection of the Boston College Library and was intrigued to find a small book with a leather and cardboard cover with the title "Margaret O'Brien's Book, Dated November 23rd 1822". It comprised a manuscript of one hundred and four pages, eighty-seven of which had a Beaha Mairgréad and the rest a Himin Phadruig, a prayer to Saint Patrick. The name of the scribe, Soan Breanach, appears on page 88, along with the date 1819.  At the end of the Saint Patrick prayer he dedicated the work with a prayer for divine protection for Murcha Ó Briain, his wife, Margaret McCarthy and their children.

What is fascinating to me about this early nineteenth-century manuscript is how it carried on the traditions of medieval hagiography into the modern era. The book measures only 3 inches by 4 inches and Dr Nilsen concludes that it was probably designed as a portable type of talisman, carried or possibly even worn as protection. This is borne out by the last words of Saint Margaret, a petition to God which she was allowed to make immediately before her execution and which may account for the continuing popularity of The Life of Saint Margaret.  Here is a flavour of the protective powers the saint claims attend the hearing or reading of the account of her Passion:

"...Any house in which my Passion or Life is read may no defective, deaf, blind, dumb, lame or maimed child be born there. And any house in which it is chanted, may it be free from all diseases and from the power of fire, water and enemies. If it is read to a man before he goes to battle, he will return safely and victoriously with pure faith.

Then there is another petition which affirms Saint Margaret's role as the protectress of women in labour:

"If it is recited to a woman in the throes of childbirth, she will come through that difficulty unharmed and with faith and hope in the One True God and in the aid to the angelic court to pray to God to ask Him to show her a sign.

There are also others for travellers, which presumably had a direct application to an Irish family crossing the Atlantic:

"Whoever listens to it as he travels overseas will return safely to the same country if his intention is pure.

"If it is read to someone going on board ship, he will return safe from that journey with proper faith and hope in the one true God...."

Having repeated her petitions in verse, Saint Margaret is beheaded and her persecutor himself falls down dead beside her. Hosts of angels then descend and lead Margaret's soul into heaven.

This manuscript Life of Saint Margaret, copied by a trained scribe in the second decade of the nineteenth century, is thus a fascinating survival of the medieval hagiographic tradition which along with the enduring power of talismanic prayer continued to find an outlet in Irish popular religious expression.

[1] Salvador Ryan, ‘“I, too, am a Christian”: early martyrs and their lives in the late medieval and early modern Irish manuscript tradition’, in Peter Clarke and Tony Claydon (eds), Saints and Sanctity: Studies in Church History 47. Abingdon: Boydell Press, (2011), footnote 34, p. 204.

What an interesting post. I had no idea such books persisted so late in the tradition.

Me neither. I am glad you found it of interest. Dr Nilsen's paper is available through JSTOR.