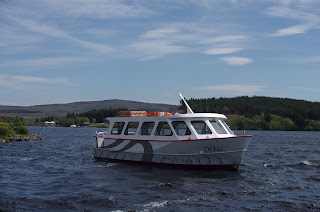 July 24 is one of the three feast days assigned to Saint Davog (Dabheoc) of Lough Derg, County Donegal, home to the medieval pilgrimage site of Saint Patrick's Purgatory. As this day falls within the pilgrimage season it is the one on which the memory of this early saint is marked on the island itself. As you can see from the photograph above (taken on my last visit) Saint Davog gives his name to one of the boats which ferries pilgrims to the island. You can also see the beautiful marble statue of the saint in the basilica and hear the current Prior recite a prayer to Saint Davog by clicking on this link. I have already posted a full account of Saint Davog on his January 1 feast day here, but below we have a reminder of his career from Irish Anglican writer St. John Drelincourt Seymour (1880-1950), who penned a number of interesting historical studies including Saint Patrick's Purgatory: a Medieval Pilgrimage in Ireland:

At one time Station Island was known as St. Dabheoc's Island, from which the cave and surrounding district took the name of Termon-Dabheoc. This saint, whose name sometimes appears under such forms as Beoc and Mobheoc, following a recognised method of treating Irish saints' names, and is latinized Dabeocus, Abogus, Arvogus, and perhaps Beanus, is held to be the patron saint of Lough Derg. Three festivals were annually held in his honour viz., January 1st, July 24th, and December 16th. In the Martyrology of Tallaght occurs the following allusion to him:

Lochagerg, or Loch Gerg, being other forms of Lough Derg. St. Cummian of Connor, in his poem on the characteristic virtues of Irish Saints, credits him with performing the following austerities, which were also practised by other persons eminent for sanctity in Ireland and the East:

"Mobheoc the gifted, loved,
According to the synod of the learned,
That often in bowing his head
He plunged it under water."

His memory is still perpetuated in the townland-denomination of Seeavoc on the southern extremity of the lake. This name means "St. Dabheoc's Seat," and this curious structure may still be seen in the vicinity, though it is not now reckoned as on the above townland.

It is certain that at some remote date a saint named Dabheoc lived at Lough Derg, and was very probably the original founder of the monastery there. Beyond this all is mere conjecture. There exists some uncertainty as to whether there were not two saints of the same name connected with the spot, the one a Welshman, son of a king named Brecan, who ruled over a district now represented by Brecknock, the other an Irishman, descended from Dichu, St. Patrick's convert. But that an important Celtic monastery flourished here at an early date is made certain by the irrefragable arguments of stone. On Saints' Island are the remains of an ancient oratory and cemetery, while the large lis, or circular earthen enclosure there, probably marks the site of the original monastic establishment. On Station Island are the remains of the "penal beds," which so great an authority as Wakeman, after a careful examination, considered to be the ruins of what were originally bee-hive oratories, probably of the ninth century, of which examples are to be found along the west coast of Ireland. It seems probable that the two islands were held as one by the Celtic monks, forming together the monastery of Lough Derg. Add to the above the remains of carved stones, inscribed monuments, and fragments of crosses, and some small conception may be formed of its erstwhile importance.

But, as unfortunately happens so often in Ireland, the mists settle down very speedily, and the history of the site is blotted out. Under the year 721 the Four Masters record the death of Cillene of Lough Derg, who was probably an inmate, or perhaps abbot, of the establishment. It is quite probable that at some unrecorded date the monastery was wiped out by the Danish invaders in their terrible forays.