Saint Carthach of Lismore, May 14 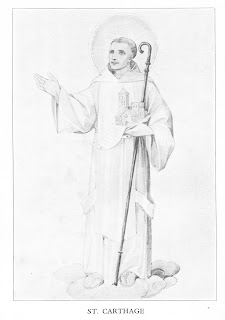 May 14 is the feast of Saint Carthach (Carthage, Carthagh. Mochuda) of Lismore. I have previously published an introduction to the saint here and a paper on his life here but today we have a fresh reminder of his career courtesy of The New Zealand Tablet:

Lismore Cathedral is said to have been founded by St. Carthagh (McCarthy) about the year 636, and was subsequently repaired and partially rebuilt in the year 1130 by Cormao, the son of Mauretus, King of Munster. We have but very imperfect accounts of this saint and his works. At one time Lismore vied in importance with the moat flourishing cities of Ireland, having had a university and being a bishop's see. Besides its monasteries, it is said that it contained no fewer than 20 churches. The ruins of several were still standing within the last century. It is stated on good authority that King Alfred of Northumbria was among the noble persons who received their education at Lismore. When St. Carthagh founded the Cathedral of Lismore he also established an abbey of Canons Regular. St. Carthagh's rule is still extant in Irish, and was very severe. These monks lived in the same manner as the Trappists at present, confining their diet to vegetables, which they raised with their own hands. When Carthagh was a youth, like David, he watched his father's flocks. His piety, gentleness, and grace attracted the notice of the prince of the province and his wife, who was daughter to the king of Munster, and they became very fond of the boy. While tending his herd one day a bishop and suite passed, chanting hymns. The boy was so captivated by this psalmody that he followed them to the gate of the convent, where they stopped and passed the night outside listening to them. The prince, who loved the boy, sought him everywhere, and when he returned he asked him why he did not come as usual on the previous evening. 'My Lord,' he replied, 'I did not come because I was ravished by the divine song of the holy clergy; please heaven, lord duke, that I was with them, that I might learn to sing as they do.' The prince admitted him to his table, offered him a sword, buckler, lance, and other gifts, to turn him from his purpose; but the boy refused them, saying 'that he wanted no gifts, he wanted but one thing, to chant hymns like the saints of God.' In the end he prevailed and was sent to the Bishop to be made a monk. St. Carthagh was descended from Ire, second son of Milesius, and was a native of Munster. Tie was the first abbot of Ratheny, in Westmeath, which he founded, and in which he is said to have governed over 800 monks. About the year 631 he was driven from Ratheny by King Blathmac. Afterwards he became Bishop of Lismore, where he built a cathedral and several schools. He did not survive his labors long, for he died in the year 638, full of the odor of virtue and sanctity.