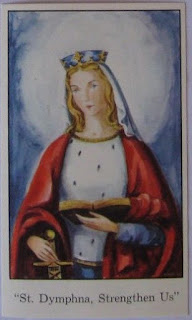 Today is the feast of Saint Dymphna, a saint who embodies all of the difficulties in trying to untangle the facts about the lives and identities of the Irish saints. The story that has come down to us is of a seventh-century Irish princess who fled the incestuous attentions of her deranged father and ended up dying a martyr's death in Belgium. However, her name is not recorded in any of our early native calendars of the saints and the first mention we have of her story is in a thirteenth century Life written by a Flemish monk. Belgium has continued to cherish her memory and in the article below, taken from a syndicated piece published in the New Zealand press in 1925, we get a flavour of the celebrations held to honour the reputed 1325th anniversary of her arrival in that country. The writer also seeks to explain her patronage of those suffering from mental illness:

A succession of feasts to commemorate the 1325th anniversary of the arrival on Belgian soil of the Irish Princess, Saint Dymphna are now taking place in the unique town of Gheel (says a Louvain message under date June 18). The celebrations are of truly royal splendor. In the jubilee procession held recently, bishops and prelates escorted the relics of the Saint. Her history was represented in floats and groups of which the Irish flag and harp, and oldtime Irish costumes were prominent features.

Dymphna was a young and beautiful princess leading a Christian life at her pagan father's court in Ireland. Solicited by him to contract a union against which nature rebelled, she fled from home with a retinue of attendants and the saintly old priest Gerebernus.

They put to sea in a frail skiff and landed, after passing through a series of adventures, upon the Belgian coast, near Antwerp. Penetrating into the interior, they travelled until they reached a point in what is now the township of Gheel, where they pitched their tents and thought themselves safe.

But the King, thwarted in his designs, set out in pursuit of his fugitive daughter, I reached Belgium also, and there traced, her whereabouts by the coins with which her party had paid their way through the land.

Having come upon her retreat, he again urged her marriage. Dymphna resisted as before. Exasperated into fury, the unnatural father imbrued his hands in his child's blood, severing her head at one blow of his sword, whilst his companions put to death the holy priest who, by his counsel and example, had assisted the young Irish maiden  to keep unsullied her faith and her purity.

It was not many years after the unfolding of this double tragedy that the people of the country witness to it began to pay a religious homage to the victims, but particularly to Dymphna. To her they had recourse to obtain the cure for themselves or a for others of various diseases, but especially of diseases of the mind.

Regarding the father's passion as a manifestation of insanity and considering that the daughter triumphed over it in a manner most heroic and most pleasing to God, they reasoned that Dymphna in Heaven most assuredly would listen to prayers in favor of the unfortunate wretches whom insanity makes strangers to the calls of reason and humanity.

Grateful for the blessings secured through her intercession, her humble devotees, poor peasants of the unfertile Campine, built a chapel upon the very spot where she had spent three months of her sojourn among them.

Her relics and those of her companions were kept in this chapel until the completion in the XIV century of the magnificent temple erected at Gheel through the generosity of the ever-increasing number of pilgrims to St. Dymphna's Shrine and the princely munificence of the still extant de Merode family.

Marcella, I just discovered your site while trying to track down the Trinitarian prayer of St. Airerad the Wise, which thanks to you I have now found. Thanks you. My wife and I traveled all over Ireland last summer to celebrate our 40th anniversary. Of all the places we visited, the difficulties we had directionally in finding the Rock of Doon in Country Donegal made finding it the highlight of our trip. If God allows us to return, we would love to meet you. I have heart surgery Tuesday, so please remember me in your prayers, an American of Irish heritage(from Ardara in Donegal) living in Maryland.

Glad the blog was of help to you. God bless you and I hope your surgery goes well.