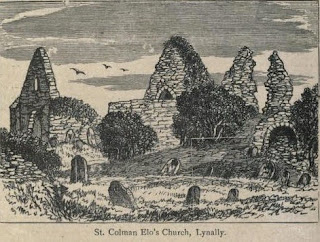 On October 3, some of the Irish calendars record the feast of the nativity of Saint Colmán Elo. The marking of the birth of this saint as a separate feast is perhaps a reflection of his importance as a scholar and monastic founder. He lived c.560–611 and the most important work ascribed to his authorship is the ascetical poem the Apgitir chrábaid (the alphabet of piety). Some modern scholars have also suggested that Saint Colmán may have been the author of the hymn in praise of Saint Patrick, traditionally attributed to Secundinus (Sechnall). I have written about this hymn, Audite omnes amantes, and reproduced a translation of it at my blog dedicated to the three patrons here. Interestingly, genealogical sources record that Colmán Elo of the moccu Béognae was a relative of Saint Colum Cille of Iona, who also has the feast of his nativity listed on the calendars at December 7. Indeed, Saint Colmán features in the Life of Columba by Adamnan and left Iona after the death of its founder in 597 to establish his own monastery at Lann Elo, modern Lynally, County Offaly. The primary feast of Saint Colmán Elo is on September 26 and a post on his life can be read at the blog here.