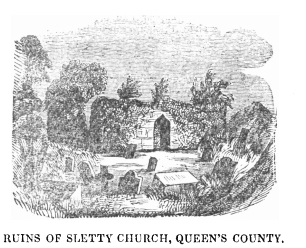 October 12 is the feastday of Saint Fiacc of Sletty, a bard converted by Saint Patrick and later made a Bishop. A paper detailing his life can be read at the blog here. Below is a beautiful tribute to the saint in his old age when, despite his advancing years, there was no lessening of his ascetic discipline:

...Fiacc in his old age lived a life of extraordinary austerity. At the beginning of Lent he usually left his monastery unattended, taking with him only five barley loaves, and these strewn with ashes. He forbade any of his monks to follow him, but he was seen to go to the hills to the north-west of Sletty, a wild and solitary district. In one of these, called Drum Coblai, he had a cave which sheltered him. The hill itself has been identified with the Doon of Clophook, which is just seven miles to the north-west of Sletty. Its eastern slope 'which is steep and beetling' rises abruptly to the height of 150 feet; at its base is the cave thirty-six feet deep by twelve in width. Close at hand there was an ancient church and cemetery, doubtless founded there in honour of the saint. Local tradition still remembers him; but as he was not seen coming or going to his church at Sletty, the wise people came to the conclusion that he had an underground passage through the mountains all the way to his own church. The fame of his sanctity and austerities still clings like the mists of morning to the mountain sides of Slieve Margy, where he spent his last and holiest days.

The poet-saint sleeps amid many miracles with kindred dust in his own church of Sletty, within view of the spires of Carlow. An ancient stone cross still standing is said to mark the spot on the right bank of the river where his holy relics rest. He was one of the earliest of our native prelates, he led an austere and humble life, he was deeply attached to the person and to the memory of his beloved master St. Patrick, and his influence has been felt for many ages in all the churches of Leinster. His poetic Life of St. Patrick, to which we have already referred, is beyond doubt an authentic poem; and if so it is the earliest and most authentic of all the Lives of the Saint. In any case it is an invaluable monument of the history, the language, and the learning of the ancient Church of Ireland....