As February 1 is the commemoration of Ireland's national patroness, Saint Brigid of Kildare, below is  a nineteenth-century article on her life, taken from a volume published in the United States in 1880. As with the account by Father Albert Barry posted here, the author has drawn on the hagiographical tradition to bring us a stirring account of Saint Brigid's virtues and miracles. If you would like to read an account of Saint Brigid from the 1930s, then please visit my other site dedicated to our three national patrons here. There I will be publishing new daily posts on Saint Brigid throughout the octave of her feast. 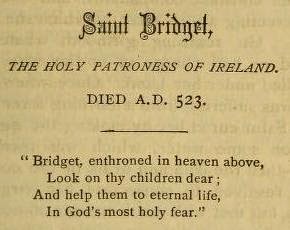 ST. BRIDGET [1], the holy Patroness of Ireland, was born at Faughart, [2] a village in the present county of Louth, soon after the light of faith began to illumine her lovely native isle. Her parents were Catholics and persons of rank. [3] Bridget's early life was surrounded by the supernatural. It is said that, when a child, angelswere her constant companions, and even aided her in erecting a little altar, at which she amused herself. On reaching girlhood, whatever she touched or had charge of in the way of food multiplied under her hand. Once when her old nurse was suffering from a burning fever the fair young Saint cured her by making the sign of the cross on some water, which was turned into mead — then the common drink of the country.

She resolved to consecrate her virginity to heaven, but met with much trouble on account of her rare beauty and the opposition of her parents. Many sought her hand. But finding that the eagerness of a multitude of suitors might, perhaps, hinder her from devoting herself entirely to God, she prayed that her beauty might be changed to ugliness. Her prayer was heard. One of her eyes became greatly enlarged, and her angelic face so altered that both parents and suitors soon left her free to embrace the religious state. Taking with her seven young ladies, Bridget went to Bishop Maccelle, [4] a disciple of St. Patrick, and requested him to give them the veil.

He hesitated for a time, but the lovely Saint re-doubled her prayers. At length, seeing a pillar of fire over her head, he clothed her in the mantle of religion, and received her profession and that of her fair companions.

During the ceremony, as Bridget bent her head to receive the holy veil, she placed her hand on the wooden altar-step ; and in a moment the dry wood became green and fresh, her eye was cured, and all the radiance of her former beauty returned.


On one occasion, as the Saint and her nuns were enjoying the hospitality of good Bishop Maccelle, she begged him to give them some spiritual instruction. He complied in a short discourse on the Eight Beatitudes. When he concluded she turned to her Sisters and said: " We are eight virgins, and eight virtues are offered to us as a means of sanctification. It is true that whoever practises one virtue perfectly must possess every other; yet let each of us now choose a virtue for special devotion."

The Sisters, through courtesy and respect, requested St. Bridget, as superioress, to take the first choice. She at once took the beatitude of "Mercy " as the beautiful virtue to which she especially wished to devote herself. It was, in truth, a happy choice — one in which she has had many followers in " the Isle of Saints and Sages."

Of the many convents founded by this illustrious lady Kildare became the most renowned. " As it was erected under the shelter of the oak," writes the Nun of Kenmare, "it obtained the name of Cell of the Oak, or Kildare. The great plain of the Curragh was her pasture-ground, donated to her by some famous chief. Bishop Mel assisted her in her arrangements, and Ailill, the King of Leinster, gave her the wood for her building. This establishment was erected some time between the years 480 and 490." [5]

St. Bridget's whole life was love in action. The wants of others touched her pure, noble, and affectionate heart. A good mother once brought her little daughter to see the Saint. The girl was about twelve years of age, and had been born dumb. Not knowing her infirmity, however, the Abbess caressed her, asking her if she intended to be a nun. There was no reply. The mother explained her child's condition ; but St. Bridget remarked that she could not let the girl's hand go until she received an answer. She repeated the question. "I will do whatever you desire," said the child, who, thus wonderfully cured, remained with her dear benefactress ever after.

The holy Abbess took the most tender care of her religious. One of the Sisters was very ill and asked for some milk. But there was none. The Saint, however, ordered some water to be given to the patient. It was suddenly changed into rich, warm milk, and the miraculous draught cured the sick Sister.

During one of her journeys a man came to her and related his domestic troubles. His wife, he said, hated him for some unknown reason, and peace had fled from his home. The Saint gave the poor fellow some water, directing him to sprinkle it through the house in his wife's absence. He did so, and his wife's dislike was turned into the most tender affection — an affection that lasted for life.

On one occasion a leper came to the convent and asked to have his clothes washed; but as he was only master of what was on his back, it became necessary to provide him with clothing while this act of charity was in the course of accomplishment. St. Bridget desired one of her nuns to give the afflicted son of Adam a second habit which she did not use. But the nun was unwilling to obey, and as a swift punishment she was then and there struck with leprosy. At the end of an hour, however, she repented of her disobedience, and was cured by the intercession of the tender- hearted Saint.

Another nun, happy in possessing the true spirit of obedience, provided the leper with clothing; and when his tattered rags were washed and returned to him he was healed of his terrible disease. " Thus," exclaims the Nun of Kenmare, from whose excellent work [6] we have gathered these details — "thus was God glorified; for the miracles of the saints are not for their own glory."

"Her only thought was heaven and God,
Her only joy was pure;
She sought bright mansions in the skies,
And life for e'er secure."

Our Saint enjoyed the most intimate friendship of St. Patrick. She foretold the date of his departure from this world, was present at his holy death, and supplied the winding-sheet — which she had long kept for the purpose — in which his blessed remains were wrapped.

One of the most touching and beautiful incidents in the life of St. Bridget was her meeting with the young student, Nenedius. As she was leaving her convent on the plains of the Liffey, she met him running along with boyish impetuosity. The holy Abbess requested one of her religious to call him to her; but Nenedius was in such a hurry that he could scarcely be prevailed upon to stay a moment.

The Saint enquired why he ran with such speed. " I am running to heaven," answered the boy.

" Would to God," said Bridget, " that I were worthy to run with you to that blessed place! Pray for me that I may one day enter there."

"O holy Virgin!" exclaimed Nenedius, "pray for me that I may persevere in the path that leads to heaven."

And the Saint prayed for the dear boy, telling him, in prophetic language, that on the day of her death she would receive the Holy Viaticum from his hands.

St. Nenedius — for he became a saint — took the most special care of that hand which would one day be so honored ; and in the kindness and humility of his heart, which ardently hoped that the life of St. Bridget would be prolonged to extreme old age, he allowed many years to roll away before he was ordained priest. He left Ireland and wandered as a pilgrim in other countries. But at length he was raised to the sacred dignity of the priesthood, turned his steps homewards, and as he reached the shores of his native isle he was called to the bedside of Ireland's holy Patroness. She was preparing for heaven. Nenedius administered the Holy Sacraments to the dying Saint, and on the 1st of February, in the year 523, St. Bridget, borne by angels, passed to the bosom of God. [7]

1  Bridget is from the Irish, and signifies strength. The name is sometimes written Brigit and Bride.

2  Faughart is in no way remarkable except as the birthplace of the Saint. It is near the town of Dundalk. The ruins of St. Bridget's old church are still here. The situation is very picturesque, looking out on the bay of Dundalk, the scene of many a notable event in Irish history. — Sister Cusack, Life of St. Bridget.

3  Her mother, Broeseach, was an O'Connor, and was of noble birth; both her parents were Christians. — Sister Cusack.

5  The little conventual building in Kildare was soon surrounded by a great city. We have said little, for such it was in its first beginnings, but it soon became a vast building and contained many hundred inhabitants. — Nun of Kenmare.

7 St. Columbkille wrote a poem in praise of St. Bridget. Its first stanza may be rendered :

There are churches dedicated to divine worship under the patronage of St. Bridget in Buffalo, Rochester, Pittsburgh, Cleveland, Philadelphia, San Francisco, St. Louis, New York, and countless other places in our country.