An Irish Poem in Praise of the Blessed Sacrament

This beautiful poem in praise of the Blessed Sacrament was written by a 12th-century poet who may also have been an abbot, Donnchadh Mór Ó Dálaigh, described in The Annals of Clonmacnoise as “Chief of Ireland for poetry.” The Annals of the Four Masters recorded his death in the year 1244 with this entry: “Donagh More O Daly, a poet who never was, and never will be surpassed, died, and was interred in the abbey of Boyle.”  The Irish text is followed by a translation below: 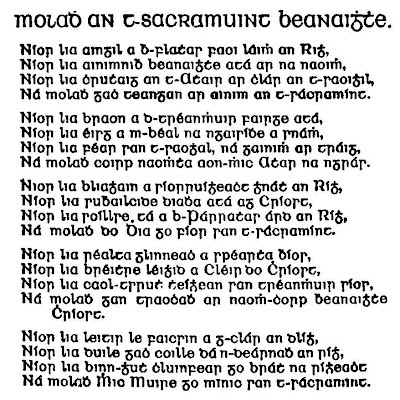 Here is the literal translation [by Professor O'Looney] of the foregoing, which was written in the twelfth century by Donogh Mór O'Daly, Abbot of Boyle, in the county Roscommon, called for the sweetness of his verses, not for the nature of their themes, the Ovid of Ireland : —

Posted by Marcella at 06:30 No comments: