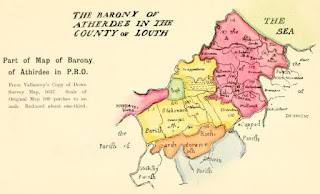 April 23 is the commemoration of an eighth-century abbot of the monastery of Linn Duachaille, Saint Suairleach. The locality of this monastery has been the subject of some dispute; in the mid-nineteenth century the Anglican Bishop William Reeves was confident that Linn Duachaille was to be identified with Magheralin in County Down but at the beginning of the twentieth century this thesis was challenged by another Anglican cleric in favour of Annagassan, County Louth. In his entry for today's saint, Canon O'Hanlon, writing in the 1870s, follows the thinking of Bishop Reeves and describes the saint as being from Magheralin, County Down. I will bring that account first and then the evidence in favour of Annagassan. Whatever the truth of the location of this monastery, it was a sufficiently well-known foundation that the passing of some of its abbots were recorded in the Irish Annals. Saint Suairleach is among these, with his death being recorded in the year 770. Sadly, Linn Duachaille monastery features even more heavily in the Annals thanks to the frequency of the Viking attacks upon it beginning in the ninth century.

According to one account, this holy man is said to have belonged to the northern province, and to the parish of Magheralin. This lies, partly in the barony of Oneilland East, county of Armagh, but chiefly in that of Lower Iveagh, county of Down. However, the entry in the Martyrology of Tallagh, at the 23rd of April, for the saint of this day, is Soardlech ind Edhnen. There he seems to be associated in locality, with the holy man, of whom a notice succeeds. One townland in the parish of Magheralin is yet called Linn Huachuille, where the old monastery stood. It was so called, from St. Colman, or Mocholmoc, the founder, who died in 699. On this day, the Martyrology of Donegal, registers a festival in honour of Suairleach, Abbot of Linn Duachaille. According to some accounts, this holy abbot died, A.D. 770; while A.D. 774 is set down for that event, in the Annals of Ulster. Subsequently to this date, that place was frequently ravaged by the Danish invaders, as recorded in our chronicles.

Monastery of Linn Duachaill.—It is in the townland of Linns, close to the village of Annagassan, that we find the first trace of an ecclesiastical establishment in the Parish of Gernonstown. St. Colman MacLuachan is said to have founded a church or monastery here in the seventh century. It was known by the name of Linn Duachaill (i.e.. Duachaill's pool), or Linn Uachaill from a demon named Duachaill, who is said to have infested the place and terrified the neighbourhood until destroyed by St. Colman. Duachaill's pool is still pointed out at the junction of the Clyde and Dee before they enter the sea at Annagassan. Dr. O'Donovan once thought that Linn Duachaill was Magheralin. Co. Down, and at first Bishop Reeves seems to have had the same opinion. But both those antiquaries found it necessary to correct their opinion on becoming acquainted with the topography and traditions of Annagassan. For Linn Duachaill was on the banks of the river called Casan Linne (Martyr. Doneg., Mar. 30, p. 91, cp Colgan Acta SS., pp. 792-703), and this river is mentioned in the "Circuit of Ireland " as lying between the Vale of Newry, or Glen Righe, and Ath Gabhla on the Boyne. The name " Casan''="paths" survives in Annagassan. According to Joyce (Names of Places, p. 373) "Casan " was originally joined with "Linne Duachaill" and became shortened to " Casan linne," which is preserved in Annagassan=Ath-na-gcasan, "the ford of the paths." Dr. Todd, who has an important note on the subject in " Wars of the Gaedhil with the Gall," p. lxii., says, Annagassan=Aonach g Casain, i.e., the " Fair of Casan." Joyce's interpretation is, I think, to be preferred, as the people still speak of the "Pass of Linns " and this pass, as pointed out, lay further up the River Glyde, about a quarter of a mile from Duachaill's pool, and near the spot where the monastery founded by St. Colman is believed to have stood.

The Four Masters and Annals of Ulster do not tell very much about the Monastery of Linn Duachaill. The following entries in the former refer to it : —

Email ThisBlogThis!Share to TwitterShare to FacebookShare to Pinterest
Labels: Irish saints, Saints of Down, Saints of Louth