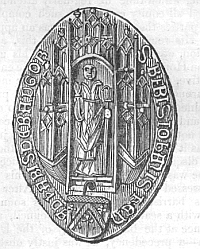 Last year I made a post on an abbot of Bangor, Indreachtach, commemorated on April 26, whose death is recorded in the Irish annals at the year 901. Canon O'Hanlon remarked that we should therefore not be surprised to find this holy man's name missing from the earliest of the Irish calendars, the Martyrology of Tallaght, which modern scholarship seems to date to around the year 830. There is, however, a second saint commemorated on April 26 associated with the famous County Down monastery, Cas, whose name is recorded in the Tallaght Martyrology. His feast is also noted in the later Martyrology of Donegal and by Bishop William Reeves, translator of Adamnan's Life of Saint Columba, in a calendar of local saints compiled as an appendix to his work Ecclesiastical Antiquities of Down, Connor and Dromore. Other details, however, are lacking, as Canon O'Hanlon explains:

St. Cas, of Bennchar, or Bangor, County of Down.

We find an entry in the Martyrology of Tallagh; at this date, regarding Cas of Bennchair. The Bollandists record Cassius Benchorensis, at the 26th of April. We know not whether he attained any superior position, in this celebrated monastery. The Martyrology of Donegal mentions, that Cas, of Bennchar, had a festival on this day. In the Irish Calendar, contained in the Common Place Book F, we have his name also entered. In that calendar, moreover, compiled by the Rev. William Reeves, his name occurs.