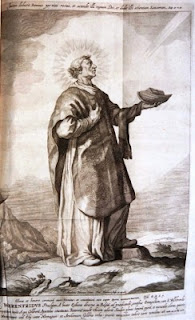 Right on the heels of Saint Wigbert, we commemorate at August 14 another of the missionaries to Frisia who had been prepared for his labours in Ireland, Saint Werenfrid. As Canon O'Hanlon puts it, Werenfrid came to this country 'for greater improvement in the science of the saints' and he appears to have met with greater success in his mission than Saint Wigbert:

This holy man was one of the many missionaries that left the theological schools of Ireland, to carry the message of Gospel peace to the intellects and souls of unbelievers in distant countries. Like many such preachers, although almost unknown in the country he had left, memorials have been preserved among those people who had profited by his teaching. A most ancient manuscript, belonging to the church of Utrecht, furnished Surius with matter to introduce at this day the Acts of St. Werenfrid. On this day, Greven, Molanus, and several other Martyrologists, assign a festival for St. Werenfridus; and the Bollandists, while transferring notices of him to the 27th of this month, still mark his feast at this date. In the work of Bishop Challenor, we find an account of St. Werenfrid, Priest and Confessor, at the 14th of August. The Petits Bollandistes also notice St. Werenfrid or Guerfroy, at this date. He was an Englishman by birth, and probably he was born in the kingdom of Northumbria. For greater improvement in the science of the saints, he forsook country and friends, to dedicate himself wholly to the service of his fellow creatures. He thereupon passed over into Ireland, where he served God in solitude and recollection.

He is said to have been one of those twelve apostolic men belonging to the English nation, who were destined for a missionary career. With their leader St. Willebrord, these were sent out of Ireland by St. Egbert. These were destined to carry the word of life to the Frisons, Saxons, and other pagans in Germany. The exact time of St. Werenfrid's arrival there, is not so well known. He was one of those Gospel preachers, however, to whom the Netherlanders were indebted for their Christian teaching. He particularly planted the faith and church of Christ in the Isle of Batavia or Betuwe. He likewise converted the inhabitants of Medemblick, Durostadt, Elst, and Westerwort.

His admirable virtues were very remarkable. The writer of his Acts assures us, that it was impossible to express how rich he was in all good work, and how careful he had been in administering comfort to the afflicted. He was incomparable for his humanity, while he was an exemplar of charity towards the poor. He was assiduous in his watching, and rigorous in his fasting. He was diligent in prayer, and he excelled in chastity. In fine, he was conspicuous for all good qualities.

Great success attended his labours in gaining souls to Christ. In a good old age, he received the reward of his labour. He departed some time in the eighth century. His body was interred at Elst. There formerly stood a collegiate church dedicated to God in his name. This was much frequented, because miracles were often wrought within it. St. Werenfrid's feast is kept as a Double in the diocese of Utrecht, on the 27th day of August. The 14th was the day of his decease, however, according to the best accounts. He is likewise entered in the anonymous Calendar of national saints, at the 14th of August, as published in O'Sullevan Beare's work.