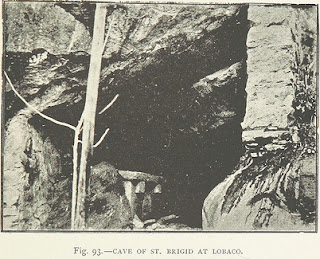 Following on from yesterday's feast of Saint Solon, we can now examine another of the feasts noted by the Scottish hagiologist Thomas Dempster. In his Menologium Scotorum at August 20 he notes:

As I explained yesterday when dealing with another of Dempster's calendar entries, the Irish were rather upset by this Scottish writer's tendency to ignore the historical reality that in the early medieval period the Latin term Scotia was applied to Ireland and he claimed Irish saints and religious foundations on the continent for his own country. The virgin Brigid who came from Scotia with her brother the Archdeacon Andrew and was commemorated in the mountains of Fiesole on this day was an Irishwoman. I have been interested for some time now in the story of this Saint Brigid and her brother the Archdeacon Andrew who had come to Italy with fellow-Irishman Donatus, later appointed Bishop of Fiesole. As the story has come down to us, Andrew and his sister had been very close and she was heartbroken when he left Ireland to accompany Donatus on pilgrimage. Years later, as Andrew lay dying he wished for nothing more than to see his beloved sister again and she was miraculously transported from her home in Ireland to be with him. I have reproduced Margaret Stokes' lovely version of the story here. After her brother's death Brigid stayed on in the locality of Fiesole and lived the hermit life within a cave in the mountains.  It is a very beautiful and touching story, but I have always wondered if this Italian Brigid was not a separate individual living in the 9th century, as the hagiography portrays, but rather a manifestation of the cult of Saint Brigid of Kildare as brought to Italy and enthusiastically promoted by Bishop Donatus? One clue might be that although Dempster has recorded August 20 as the feastday of the Italian Brigid, he also records that she is commemorated on February 1, the feastday of the patroness of Ireland. Although Canon O'Hanlon seems content to accept that there were two separate Saints Brigid, he nevertheless finds their sharing of the same feastday a coincidence too far. The Italian writer on the Irish saints in Italy, Fra Anselmo Tommasini, puts forward some other reasons why he believes Brigid of Italy is really just the cultus of Brigid of Kildare and so I will return to this subject in a future post. For now, I will bring Canon O'Hanlon's account of this feastday from the August volume of the Lives of the Irish Saints:

The present St. Brigid is to be distinguished from the holy Patroness of Ireland, so named, and from another St. Brigid, venerated at the 14th of March. In Dempster's "Menologium Scotorum," at the 20th of August, there is a feast set down for St. Brigid, a noble Scottish virgin, who came to her brother St. Andrew, an Archdeacon, in a miraculous manner. He lived in the mountains at Fesula in Italy, with St. Donatus. We have already treated about the holy virgin St. Brigid, who lived in a hermitage near the source of the little river Sieci, where during her old age, she sought in a thick forest, among the higher Apennines, a place where she might lead a solitary life. There she desired to live, in penitence and prayer. She found a cave, at a lonely place called Opacum, near Lobaco, high among the mountains. There she passed a term of years, and died, during the latter half of the ninth century. The inhabitants of that country, venerating her as a saint, buried her remains, and built a church in her name, on the site of her hermitage. This was called S. Brigida. Her Natalis was celebrated there in after years with great solemnity. The Pieve or parochial district of Lobaco owns two filial parishes, St. Brigid at Lobaco, and St. Minatus at Pagnoli. Again, there is an ancient Church of San Martino, of Tours, beneath the shelter of the walls of Castel Lobaco; and here, also, the memory of our Irish St. Brigid was held in especial reverence. In his "Historia Ecclesiastica Gentis Scotorum," Dempster asserts, that her festival was observed on the 1st of February, that she was renowned for sanctity in 802, that she was miraculously brought to Italy, that her writings have perished, and that he is unable to find when she died. It seems very probable, however, that our Irish St. Brigid's festival abroad may have been confounded with that of the great St. Brigid, Patroness of Ireland; otherwise it is difficult to conceive how such a coincidence could have occurred, as to cause both their feasts to fall on the same day.