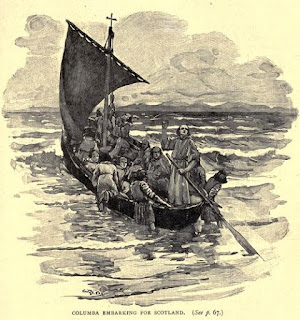 On July 30 Canon O'Hanlon has a short account of Saint Cobthach, kinsman of Saint Colum Cille of Iona, whom he claims has a feast on this day, at least according to the two nineteenth-century scholars John O'Donovan and George Petrie. Unfortunately I have not been able to access the work referenced to see on what basis this claim was made. Bishop William Reeves, who published a scholarly edition of The Life of Saint Columba in 1857, noted that the seventeenth-century Scottish martyrologist, David Camerarius, had ascribed August 7 to the feast of Cobthach, but without any supporting authority. In the hagiography of Iona's founder, Cobthach features as the son of Colum Cille's father's brother which would make them first cousins. Cobthach, along with his brother Baithene, were among the original twelve disciples of Saint Colum Cille who accompanied him on the voyage from Ireland to Iona, as Canon O'Hanlon explains:

Article IV.—St. Cobthach, Disciple of Columkille.
This devoted follower of the great Abbot of Iona, was the son of Brendan, and brother of St. Baithene, who immediately succeeded St. Columkille in the monastery at Iona. He was one of the twelve first disciples, who sailed from Ireland to that island with the founder. We find a commemoration for him at the 30th of July, on the authority of George Petrie, LL.D., and John O'Donovan, LL.D. The Rev. Dr. Reeves,when alluding to the early companions of St. Columkille, remarks, that Camerarius gives him a day, at the 7th of August, in the Calendar, but without any authority.