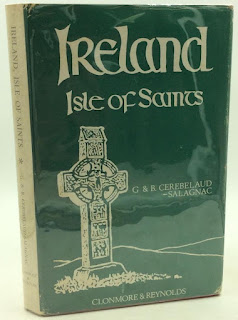 8 July is the feastday of Killian of Würzburg, an Irish missionary saint and martyr, whose memory is still very much alive today. I have previously published an account from Abbé McGeoghegan here and now bring a reminder of the martyrdom of Saint Killian and his companions from the English translation of another French work, Irlande Ile des Saints, by G and B Cerebelaud-Salagnac:

Let us now set out for Thuringia, in the footsteps of Killian (or Cilian). He would have been born about the year 640 in County Cavan. When he became a monk, and was first moved by the missionary grace, he went to the Continent with eleven companions (always the number twelve, clearly regarded as perfect). Passing through northern Gaul they reached the Rhine which they crossed and came to the castle of Würzburg, where lived Gozbert, Duke of Thuringia. Gozbert heard Killian readily, even when the monk pointed out to him that his union with Geilana, his brother's widow, was incestuous (this was the commonly accepted view at that time). He renounced Geilana. This woman conceived a deep resentment against the monk and from then on she only lived to revenge herself. About the year 689 she brought about the murder of the Bishop, along with two of his companions, Colman and Totnan.

"A custom, similar to that which was to be found among the Jews, had been in common practice among the people of Würzburg, and it had just been adopted by Prince Gozbert himself. He had taken as his wife his brother's widow, whose name was Geilana (or Geila). The prince had feelings of love and affection for her. It soon became Saint Killian's duty to explain to him the Church's ruling on this matter.... He did this gently and in the most persuasive way ... the first time he approached this subject, the king showed great aversion to this idea of separation, but when he became aware that this was necessary, if he wished to live according to his profession of faith, he consented, in a Christian spirit of sacrifice. The king's resolution came to the knowledge of Geilana. She was not prepared to bow to the royal decision. Her arguments and her cunning were, however, without effect, for the prince's will was unshakeable. She then began to burn with unquenchable rage against the servants of Jesus Christ, and decided to seize the first opportunity for taking a terrible revenge; this was not long in appearing.

"The prince was called to a long distance on a military expedition in the year 689; his cruel wife was able to find some hardened criminals, whom she hired to carry out her plan of vengeance, Although miraculous warnings had been given, it is said, to Saint Killian and his companions about this plot, they did not wish to save their lives by flight, nor even by seeking the protection which they would have easily found among the people of Würzburg. Saint Killian exhorted his companions to be steadfast, assuring them that their souls could not be injured by the assaults of their enemies. The holy missionaries began to prepare themselves, by prayer and by fasting, to face the danger by which they were threatened. On July 8th, 689 (according to certain authors 688), while Saint Killian and his companions, among whom were Colman and Totnan, were meeting together, these murderers, armed with swords, entered the room where they were. St. Killian offered himself the first to the executioners, and was immediately struck down at their feet. His companions fell in the same fashion. In order to conceal the marks of this slaughter, the bodies of the martyrs were taken away by night and buried secretly. The cross, the book of the Gospels with their other books and belongings, were thrown into the same grave....