July 8 is the feastday of Saint Killian (Kilian, Cillian, Chilianus), an Irish missionary saint martyred in continental Europe along with two companions on this day in the year 689. It is therefore perhaps appropriate that we allow another Irishman exiled to the continent at a later period, the Abbé Mac Geoghegan, to remind us of Saint Killian's career. The Abbé's History of Ireland Ancient and Modern was published in French around 1750, an English translation was issued in Ireland in the early 19th century and a second edition in New York in the 1840s. In the footnotes to his account of Saint Killian, the Abbé cites various continental chroniclers to prove the saint's Irish origins and I have reproduced those here. Finally, the picture below shows one of the special items issued jointly by the Irish and German post offices in 1989 to commemorate the 1300th anniversary of Saint Kilian's martyrdom. 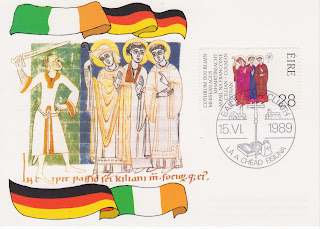 St. Kilian, a native of Ireland, called the apostle of Franconia, left his country with two companions called Colonat and Totnan, the one a priest and the other a deacon; being desirous to visit the church of Rome, he took his route through Flanders and Germany on his arrival in Rome, having been presented to pope Conon, the holy father found him to be possessed of so much wisdom, and so perfect in his knowledge of the holy Scriptures, that he ordained and appointed him to preach the gospel to the infidels of Franconia, where having converted duke Gosbert, and a great number of his subjects, he fixed his see at Würtzburg, of which he was the first bishop, and was afterwards honoured as a martyr.

Gosbert, whilst he was a pagan, married Geilana, his brother's wife; but being converted to Christianity, St. Kilian, like another John the Baptist, reproached him with truly apostolical freedom, for this incestuous marriage, and advised him to separate from her; Gielana, exasperated at the holy prelate's reproof, caused him and his companions to be assassinated on the 8th of July, 689, the day on which they are honoured by the church as martyrs.

The removal of these holy bodies by St. Burchard, bishop of that see, gave rise to the Hexastich, as subjoined; it was written in the beginning of the sixteenth century, by Doctor Engilhard Funkius. Some works are attributed to St Kilian, namely a treatise against Arianism, and one against extraneous worship.

"From a district of Austria, and a castle called Wirtzburg near the river Meuse, the birth-place of the martyr Chilianus and two of his companions, who after coming from the island of Scotia (Ireland) preached the gospel of Christ in the above places." —Martyrology of Rhabanus.

"The holy Kilianus born in the island of Hibernia (Ireland) is considered as a renowned bishop of Würtzburg."—Marianus Scotus

"Saint Kilianus an Irish monk, preached in these times the evangelical doctrine to the eastern Francs, and is called their apostle."—Chronicles of Cardinal Bellarmini.

"In a district of Austria, where stood a castle of New France, nay a city as in the Teutonic dialect, Wirtzburg, situate near the river Meuse, signifies, the martyrdom of St. Kilianus, the first bishop of that city, and that of his two disciples, Colonatus a presbyter, and Totnanus a deacon,took place. They came from Ireland, the island of the Scots, and after receiving the authority of the apostolical see, they preached the name of Christ to that city and district."—Martyrology of Notker.

"The martyrdom of Saint Kilianus, the first bishop of Wurtzburgh, and of his two disciples Colonatus a presbyter, and Totnatus a dean, who coming from Hibernia the island of the Scots, having received their authority from the apostolical see, preached the name of Christ in that place and the surrounding country."—Notker le Begue, monk of St Gall.

The History of Ireland Ancient and Modern taken from the most authentic records and dedicated to the Irish Brigade by the Abbé Mac Geoghegan (Dublin, 1844), 117, 194.