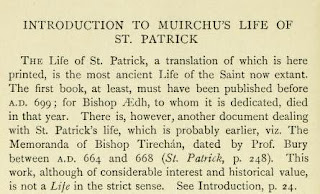 July 3 is the feast day assigned to one of Saint Patrick's biographers- Saint Tírechán - at least on two of the later calendars. The one fact that speaks of something of the life of this holy man is that recorded by the anonymous early ninth-century scribe in the Book of Armagh version of Tírechán's work:

"Bishop Tírechán has written this, based on the words and the book of bishop Ultán, whose fosterling and pupil he was."

Thus we learn that Tírechán  was himself a bishop and that he was a contemporary of Ultán of Ardbreccan, whose own biographical studies he had drawn upon.  This places him in the seventh century.

Canon O'Hanlon's account below is concerned with reconciling the chronology of Saint Tírechán's life with those of other saints, but for a flavour of more recent scholarship and a much fuller picture of this holy man I recommend the article 'Tírechán: Biography and Character Study' by Terry O'Hagan, which can be read at the Royal Irish Academy's Confessio website here.  Canon O'Hanlon, writing in the nineteenth century, remarks that the general public will soon have a chance to read a translation of Tírechán's work for themselves, for it was only in his lifetime that the works of not only Saint Patrick's biographers but also of our national apostle's own writings were made available to a wider audience. I have previously posted on the manuscript sources at my other site here and here.

It is much to be regretted, that we know very little relating to the personal history of the present distinguished bishop, so much regarded in his day, and who was remarkable, doubtless, for his holiness of life, as for his proficiency in learning. Being one of St. Patrick's early biographers should alone give him a special claim on our veneration. Marianus O'Gorman has an entry of Tirechan, at the 3rd of July, in his Calendar. It may be supposed, that Tirechan had been a native of Cashel or of its vicinity, if he is to be confounded with a Tirechan who had gone to Rome, and who at the entreaty of his mother was recalled, at a time when St. Fechin, Abbot of Fore, had visited that city, over which Moenach then ruled. Tirechan tells us himself, that he was the disciple of St. Ultan, who wrote the Acts of St. Patrick. He was bishop of Ardbrecain, and he died A.D. 665. In the Book of Armagh are found Latin annotations on the Life of St. Patrick by Tirechan, and which throw some light on the source whence his narrative had been drawn.  Like his master Ultan, this saint wrote the Acts of St. Patrick, in two books. We are informed in these, that he was a disciple of that holy Bishop, from whose lips or from whose book, he had composed his own work. He also tells us in it, that he was himself a bishop, but he does not state where his See had been. A copy of this Life of St. Patrick by Tirechan is extant in the Leabhar Arda Macha, or the Book of Armagh. This is quoted by Dr. Jeoffry Keating.  It has lately engaged the attention of an able and a learned editor, so that the reading public shall soon have an opportunity of becoming acquainted with its contents. These Acts were in possession of the learned Archbishop Ussher, who frequently quotes from them, in his valuable historic work, " De Primordiis Ecclesiarum Britannicarum." Extracts from them have also been reproduced, by the learned hagiologist, Father John Colgan. This interesting ancient memoir by Tirechan throws very considerable light on the early ecclesiastical history of Ireland, as also on the biography of the Irish Apostle. According to the chronology of Tirechan, he places the death of St. Patrick, at A.D. 436 from the Passion, or A.D. 469 from the Nativity of Christ. He states, likewise, that King Loiguire reigned two or five years after the Irish Apostle's decease; while he supposes the total duration of that reign, to have been thirty-six years. A conjecture has been offered, that the present holy man complied with a request made by St. Fechin, Abbot of Fore, to visit his mother. This seems to come within the range of possibility. The times agree very well. Thus, Ultan died A.D. 655, and he was contemporary with St. Fechin, who departed this life, on the 20th of January, A.D. 664. The present saint was a bishop, and he is said to have ruled over the church of Ardbrecain. He is thought to have flourished, about the middle of the seventh century. On the 3rd of July, in the Martyrology of Donegal, appears within brackets the name of Tirechan.