Saint James the Apostle, Spain and Ireland: A 17th-century View 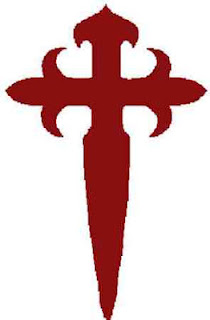 July 25 is the feast of Saint James the Apostle and I came across some interesting claims that he may have visited Ireland in the work of a seventeenth-century Irish priest, John Lynch (c.1599-1677). Father Lynch was one of a number of post-Reformation Irish writers who sought to uphold the reputation of the native medieval Church. The target of his most famous work, Cambrensis eversus (Cambrensis Overturned), published at St. Malo in 1662, was not any of the classical reformers, but rather the twelfth-century Anglo-Norman chronicler, Giraldus Cambrensis, Gerald of Wales. Gerald's accounts of Ireland betrayed a colonialist-type approach to the natives whom he saw as unsophisticated barbarians who were not even properly Christian at all. He recorded all manner of weird and wonderful tales in association with Irish saints and holy places, including, I might add, the story of the perpetual fire at Kildare and its all-female attendants. For Gerald, Ireland was less a 'land of saints and scholars' and more a land of the bizarre and barbarous. Father Lynch's work set out to put the record straight and in doing so he amassed a huge body of historical evidence. A central plank of his thesis was that Ireland had always been faithful to the centre of Western Christianity at Rome, something for which its people were now suffering. Some of the sources produced were rather curious, as Professor Salvador Ryan explains:


Most surprising of all, perhaps, Lynch underscored Ireland's ancient loyalty to the Roman Church by claiming that the Gospel had first been preached in Ireland by no less than one of the twelve Apostles. Cambrensis eversus cites Joseph Pellicer (1602-79), chronicler to King Philip IV of Spain, who in the course of expounding on the legend that St James the Apostle had preached the Gospel in Spain, had also claimed that there were 'many authorities and facts proving that James had also preached in Ireland'. Here Lynch also quotes the work of his fellow countryman, the historian Philip O'Sullivan Beare (c.1590-1660), whose Tenebriomastix ('A Scourge for the Trickster'), written in the early 1630s, details how St James, on his return from Spain, had preached in Ireland, accompanied by his father Aristobulus or Zebedee, who stayed on after him as Ireland's first bishop. Only then had James passed over to Britain. Lynch thus established an impeccable Roman and even apostolic pedigree for the Irish Church.

Fortunately a translation of Cambrensis eversus is available online, so I thought it might be interesting to see exactly what the Spanish chronicler had to say about Saint James and Ireland. The claims are cited in connection with a discussion of the antiquity of Irish Christianity which in Lynch's view predates not only Saint Patrick but also the mission of Palladius:


However, that there was no absurdity in Prosper’s statement of the existence of Christians in Ireland before the arrival of Palladius is evident from the undoubted fact that many illustrious heralds of the faith had preached Christ in Ireland before the mission of Paladius; and that their labour was not without fruit is equally certain from the scattered ears, if not the abundant harvest which sprang up in the field of their religious labours. Thus, according to Joseph Pellicer historian to the king of Spain, there are many authorities and facts to prove that St. James the apostle preached the Gospel in Ireland. He quotes many passages to that effect from the Works of Julian archpriest, of St. Justa, which I transcribe here from the “Tenebriomastix" of Philip O'Sullivan against Camerarius.

"No. 136, I have read in the book of Dexter of Barcelona, that St. James, on his return from Spain, preached the faith in Ireland. He embarked at the port of Braganta, in Gallicia, and was accompanied by Aristobulus, or Zebedee, his father, who, it is said, remained there after him, and was the first bishop. The apostle then passed over to Britain, having provided Ireland with bishops, priests, and deacons. No. 167, St. James, returning from Spain, visited Britain and Gaul, and preached in Ireland. He landed in the harbour of Dublin and erected a church to St. Mary, and converted those districts to Christianity. His seven companions, his own disciples and, as it were, his fellow apostles, Torquatus and Ctesiphon, were established by him in Ireland. No. 208, It appears from a constant tradition and the old monuments of Spain, that St. James, the son of Zebedee, passed over to Ireland (which had been peopled from Spain) with seven disciples and others, and laid there the foundation of the Christian faith. No. 434, This apostle wrote the first Epistle and Scripture of the New Testament to the Spaniards. No. 482, Idelsetus, chosen among the 12 disciples of St. James, was consecrated in Ireland and sent with others by St. Peter into Spain. No. 483, Seven holy bishops, disciples of St. James, returning from Rome, landed in Gaul, and passing thence preached the faith in Ireland."

To these we may add a passage from Vincent of Beauvais. “When the apostles visited all parts of the globe, St. James, by the inspìration of heaven, landed on the shores of Ireland, where he strenuously announced the word of God, and is said to have chosen seven disciples — namely, Torquatus, Secundus, Indalecius, Tisephont, Eufrasius, Cecilius, and Ischius." Joseph Pellicer asserts that these facts are confirmed by Braulio in his additions to the Chronicle of Maximus. The words of Dexter appear to add some authority to these statements, where he writes under the year 41, “that St. James visited Gaul and the Britains" for Ussher proves, by a host of authorities, that Ireland was anciently included among the British isles.

Professor Ryan's work puts these 17th-century Spanish quotations firmly into their historical context and makes some further interesting observations on other attempts to link Ireland and Spain:


O'Sullivan Beare also makes every effort to identify Ireland's early history with that of Catholic Spain. He emphasizes the 'Milesian Myth' which details how the Irish race is descended from four sons of King Milesius of Spain, who came to Ireland in 1342 BC, and how since that date Ireland has been ruled by no less than 181 kings of Milesian lineage. In one notable episode from the distant past, a mythical king of Munster is restored to his kingship by 3,000 Spaniards after he flees to Spain and marries the king's daughter. Like Lynch, O'Sullivan Beare also makes reference to Ireland's supposed link with St. James the Apostle. Modern scholars have noted that throughout this period Ireland is spelt as Ibernia rather than Hibernia in an effort to create the optical illusion that the name is somehow cognate with Iberia.


Today there is an Irish Society of the Friends of Saint James which was founded to promote the pilgrimage route to Santiago de Compostela. A paper by scholar Dagmar Ó Riain-Raedel on The Irish Medieval Pilgrimage to Santiago de Compostela is available to read at the archives of the periodical History Ireland here. Blogger Edel Mulcahy also has a piece on The Camino Connection here.