As an interesting contrast to Saint Cobhthach, Abbot of Kildare, whom we met on this day last year, July 18 is also the feast of a tenth-century Irish Abbot of Saint Martin's Monastery in Cologne, Germany. Saint Martin's was one of the Schottenklöster or Irish monasteries which flourished for many centuries after the golden age of the Irish peregrini in Europe. Canon O'Hanlon is not able to tell us a great deal of the specifics of this abbot's life but does put the times in which he flourished into context: 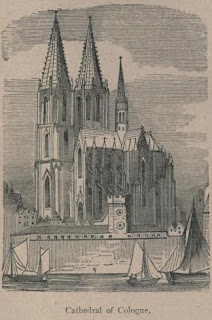 It seems very probable, that the present holy man was born in Ireland, about or a little later than the beginning of the tenth century. The form of his name is an unusual one in our early Annals, but it may have been somewhat transformed when he went to the Continent. Where he had been educated has not transpired, nor when he left the shores of Ireland. In his early days, however, the country had been woefully harassed by the Danes and other Northmen, so that it is not unlikely, many Irishmen betook themselves to more distant countries, where greater protection had been afforded than could be enjoyed at home. The city of Cologne, on the left bank of the Rhine—at first known as Ara Ubiorum —had been founded by Claudia Agrippina Augusta, wife of the Emperor Claudius, in the first century of the Christian era; and, in succeeding ages the church was well established there, with numerous pious votaries. Several fine churches were erected in it, and other religious institutions. It suffered greatly during the ravages of Attila and the Huns, in the fifth century. Especially after the apostolate of St. Boniface in Germany, the church was placed on a secure foundation in Cologne. It was erected at first into an episcopal See, and afterwards it became the See of an archbishop, who possessed very extensive powers during the middle ages. This city became likewise a great emporium of commerce, and there ships sailing Up and down the Rhine reached the most distant countries of the known world. On account of the power, influence, and numbers of its clergy, as also owing to the variety of its churches, chapels, monasteries, nunneries, and relics, Cologne has been styled "the Rome of Germany."…

...It seems most likely, that Minnborinus professed the religious life in Cologne, or at some place near it, after the middle of the tenth century. We have not been able, however, to ascertain such particulars. Ebergerus, who was then Archbishop of Cologne, bestowed the monastery of St. Martin in that city, for use of the Scots, as the Irish were then called, in 975. On the site, which was originally an Island on the River Rhine, a church had been built, but this has long disappeared. In its place arose the Gross St. Martin, which was dedicated A.D. 1172, but its lofty tower was not added, until the beginning of the fifteenth century. The lines of that church assume the form of a Greek cross. The first abbot placed over the first monastery here founded was Minnborinus, a Scot, i.e., an Irishman, and he was chosen for the position, on account of his eminent piety and character. The holy Minnborinus presided happily over St. Martin's house twelve years. He died on 15th Kal., Aug. A.D. 986. He was succeeded by his countryman Kilian, an Irish Scot, who ruled over that establishment as Abbot for sixteen years, when he departed this life on 19th of the January Kalends, A.D. 1003. Afterwards, the supply of Irish inmates seems to have declined. In consequence of misconceiving the historic name Scotia— as formerly solely applicable to Ireland—this house and its possessions had been surrendered in the middle ages to a community of Scotch Benedictines. The interior of the fine church there was modernized in 1790, and the place is still one of special interest and curiosity for most Irish and Scottish Catholic tourists.