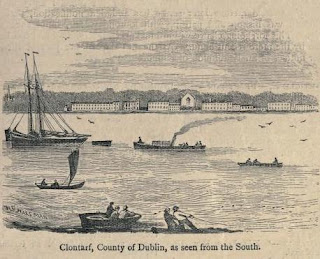 On August 3 the Irish calendars record the name of Saint Aodhán of Clontarf. Although there are no other details of the saint as an individual, the location associated with him remains rather more problematic. For most people the name Clontarf will automatically suggest Cluain Tarbh, the County Dublin location of Brian Boru's famous battle in the year 1014. Clearly this is the case for Canon O'Hanlon, whose entry below is illustrated by a picture of the Dublin suburb which he identifies as the place associated with our saint.  He admits, however, that a degree of confusion has been introduced by the fact that some of the later Irish calendars have associated Saint Aodhán with a locality called Cluain Cairbre (Carberry):

In the published Martyrology of Tallagh, this saint is called Aedhan Cluana Tarbh. This latter place is the celebrated village of Clontarf, lying on the north shore, at the entrance to the River Liffey, and near the City of Dublin. To this historic place— on the ancient plain called Magh n-Elta — allusion has been already made, in the Life of the Blessed Bryan Boroimha, King of Munster, Monarch of Ireland, and Martyr. It should now be a matter of great difficulty to decide, where exactly the former church of Clontarf had been located. The houses in that village range in a low situation along the coast, but they have a picturesque appearance from the Bay of Dublin, especially as woods recede in the background. According to the Martyrology of the O'Clerys of Donegal, a festival was celebrated at the 3rd of August, to honour St. Aodhan, of Cluain Cairpre. On what authority this denomination has been substituted for Cluain Tarbh, we cannot discover. There are various districts in Ireland called Carberry, and a still greater number of places known as Cluain or Cloon, either simply or in composition. But among over nine hundred places, so designated on the Ordnance Survey Maps of Ireland, we can find none corresponding with Cluain Cairpre which seems to indicate, that the O'Clerys have set it down through a mistake.

Finally, Pádraig Ó Riain in his Dictionary of Irish Saints suggests another possibility, one of the two County Mayo townlands called Cloontarriff which is also an anglicization of Cluain Tarbh.